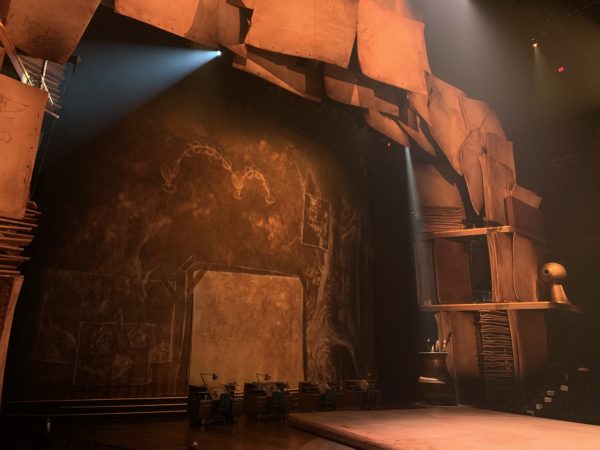 Besides getting to see Disney’s adorable new ride, Mickey and Minnie’s Runaway Railway in Disney’s Hollywood Studios, I also got a sneak preview of the new Cirque du Soleil show, Drawn to Life in Disney Springs, courtesy of the nice folks at Disney Media Relations!

The show was incredible! It is the perfect combination of Disney and Cirque du Soleil and was more emotional than I expected.

I saw the first two scenes, and I wanted to share what I saw with you!

The stage is covered in a large piece of paper on the floor. All around the theater are pieces of paper, very large pencils, pens, paintbrushes, and other tools that an animator might use. There’s also a very large Luxo-looking lamp on the left side. The stage is set up to look like an animator’s desk, and you are the size of a drawing.

I also spotted eight swings, four on each side, between the lower seating and the upper seating.

It starts with four animators desks on stage complete with lights that look oddly similar to Luxo. The animators come onto the stage along with a large hand, a pencil, and a girl, whose name is Julia.

Very quickly, acrobats dressed in line-drawing costumes appear on stage and perform incredible acrobatics. These acrobats blur the lines – pun intended – between art and reality. The drawings come to life while the animators bring them to life, but the drawings influence what the animators do. It really is a symbiotic relationship represented between the two groups.

Everything is going well, but then a large piece of crumpled paper comes in and starts throwing the drawings away. The trash cans come to life, and the large piece of paper on stage (which is the floor for the acrobats) starts to deflate and retract, and it appears that all of those really good ideas are being trashed.

But wait! Julia has an inspiration. The desks become a train with Julia as the engineer. Then a desk becomes a horse in a very humorous transition!

The desks take shape at center stage. Once they pull away, a man appears at the center. A large pencil drops from above, and he performs an aerial acrobatic performance. He draws with the pencil on stage, and his movements become bigger and bigger and then more impressive.

Large pieces of paper descend from above, and drawings appear (presumably by projection) on the papers. Drawings including Cinderella, Bambi, Fantasia, Lady and the Tramp, and more. At this point, you also hear some familiar Disney songs like You’ll Be In My Heart from Tarzan.

This scene is very emotional! As an audience member, I really felt the connection between the drawings and the Disney movies, and the aerial performance brought the whole thing together.

The scene ends with the man walking back to the girl, who is standing near the back of the stage, and he descends into the floor slowly. Then the pencil actor hands the girl a pencil. I believe this is meant to represent the fact that life reflects art and art reflects life.

Cirque du Soleil – Drawn to Life is an amazing show, and I would highly recommend it. The show opens on March 20th, 2020, but it’s already sold out through the end of March. Early on, shows are at 5:30 pm, a few days a week, then performances increase to more frequent performances and twice a day. Tickets are still available for April starting at $79 per person.

If you’d like to hear the designers speak about the show, check out the discussion before, and the panel discussion afterward.

Will you see Cirque du Soleil – Drawn to Life?