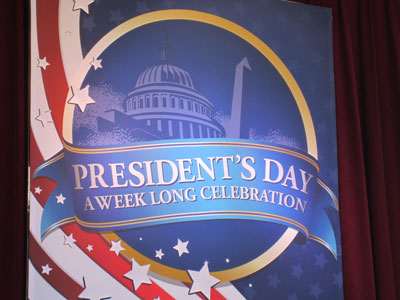 Disney celebrated all things America with a special concert by the a cappella group Voices of Liberty, who regularly perform in the rotunda of The American Adventure attraction in World Showcase of Epcot. For this special show, which is performed five times a day from February 18 – February 24, they perform in the open air America Gardens Theatre.

The group sings patriotic songs in perfect eight part harmony and share quotes from a variety of United States Presidents. Here are some of the interesting quotes and facts shared in the show:

Ronald Regan: “Those who say that we’re in a time when there are no heroes, they just don’t know where to look.”

Herbert Hoover: “Absolute freedom of the press is a foundation stone of American liberty.”

They also tell the story of how The Battle Hymn Of The Republic came to be – when writer Julia Ward Howe wrote a poem sung to the music of the song “John Brown’s Body.” She sold the poem to The Atlantic Monthly magazine and received a check for $4. The song has since become one of the most popular patriotic songs in US history. The song begins with the lyrics “Mine eyes have seen the glory of the coming of the Lord” and then moves into a chorus of “Glory, glory, hallelujah!”

What do you think of this special Voices Of Liberty show?