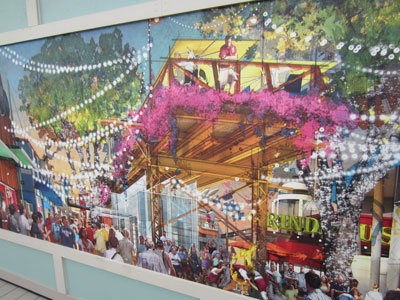 Portions of Disney Springs to Open in 2015

The second phase of the redesign will open in 2016 and will include updates to the Marketplace and West Side. Disney will also be debuting a new section called the Town Center. The Town Center will include shopping and restaurants and will be located in the old Pleasure Island parking lots.

While the major sections of Disney Springs won’t open until 2015 and 2016, Disney will open some new areas in the summer of 2014.

The second location is in the West Side not far from the Characters in Flight balloon attraction. This location is a stand-alone building, and features a patio with waterfront views. It also includes a fireplace, which should be very nice during the summer in Florida!

The Westside Starbucks location will be similar to the Starbucks that is now open in the Disneyland version of Disney Springs. It features large video screens that show pictures of coffee regions around the world.

The summer of 2014 will also see the opening of the new Marketplace Co-op boutique. This one location will feature six different retail concepts under one roof. The shops will include:

The United World of Soccer will open in May in the West Side. It will feature sports gear, team jerseys, accessories, and clothing.

Disney also plans to open a permanent location for its food trucks. It will be called Food Truck Park and will be located between the new Starbucks on the Westside and the existing Bongos Cuban Café.

Two huge parking garages are currently under construction and have been for some time. These should definitely help with the parking issues that have plagued Disney Springs for years. There is no opening date yet for these garages.

Buena Vista Drive, which is the primary road in front of Disney Springs, is also currently under construction. Construction workers often close off lanes during off-peak hours. Disney plans to expand this already large road from seven to ten lanes. This will include a one lane dedicated just to buses.

I think it is very interesting to note that Disney has announced there will be an interchange off of interstate I-4 that will allow guests direct access from the highway to Disney Springs. This is sure be a huge improvement on how traffic flows in and out of Disney Springs.

When Disney Springs is finally complete in 2016, it will be twice the size of the old Disney Springs and will include around 150 shops and restaurants.

Are you looking forward to the opening of Disney Springs?