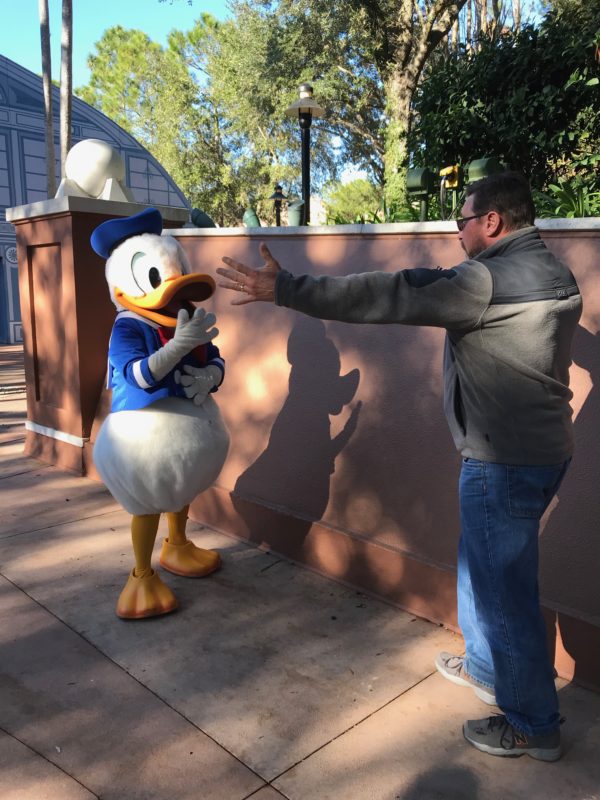 Meeting Disney characters can be a highlight of any family vacation. The characters are highly interactive, friendly, and animated especially because they can’t talk.

But how do Disney’s characters learn how to meet and greet guests?

Well, like anything else, they have to train! The best way to learn how to do something, most of the time, is to actually do it!

During a recent visit to Disney World, my family and I were wandering through Epcot’s World Showcase when we came across some giant open gates between United Kingdom and France. I like to take advantage of an opportunity to sneak a peek anywhere Disney will let me, so I peered in, and what did I see but a pop-up character meet and greet! There were six characters including Mickey, Donald, and Pluto. My dad, who has entertained people his whole life with his ability to talk like Donald Duck, was thrilled, and even moved to tears when he was finally able to meet his idol.

Interestingly, I came home to research such a strange meet and greet behind a giant fence, and I found that this is rare, but it isn’t impossible to find. In fact, it happens most often in Epcot probably because characters can fit in without taking away too much from the “story” going on.

It’s not just characters that train in the art of meet and greets during these impromptu sessions, though. Anytime a character goes on a meet and greet, another Cast Member must accompany them. This is especially true for costumed characters, though it does happen with face characters too. Sometimes, it’s the accompanying Cast Members being trained. During our experience, I really wanted to meet Mickey, but the Cast Member told me the meet and greet was over. I pleaded, but she insisted. Maybe she was being evaluated!

It’s impossible to know when such meet and greets will take place because they are never on a times guide or schedule or any kind, but you are more likely to find them when new characters are training including shortly after a new Disney College Program class has started and before Halloween and Christmas when characters might be training or brushing up for their rare appearances at the holiday parties.

Look for pop-up meet and greets near the International Gateway, The American Adventure, Journey Into Imagination, and near the Fountain of Nations in Future World.

Have you ever come across a character training meet and greet?