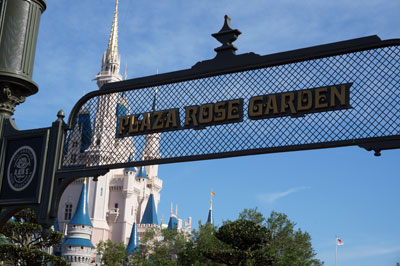 Goodbye to the Plaza Rose Garden as We Know It

The Plaza Rose Garden is one of the most tranquil places in the Magic Kingdom. Even though it is just steps away from all the commotion and the crowds of Main Street USA and the Cinderella Castle hub area, the rose garden is very peaceful and usually very empty.

If you enjoy gardens, especially rose gardens, it was a great place to take a break.

Disney is planning for some big changes to the “hub”, or the area immediately in front of Cinderella Castle where you can find the “Partners” statue of Walt Disney and Mickey.

The hub is a busy place. All day long people gather in this area in front of the Castle to watch shows;  some are passing through from one themed land to another.

However, during the evenings, the Castle Hub becomes mobbed with people. It offers prime viewing locations for the Wishes fireworks show and the Main Street Electrical parade. People crowd in and occupy every available square inch of space. When the evening festivities are over, the huge crowd tries to slowly exit the park, but with so many people moving in such a small space, it always feels a little chaotic.

Disney has plans to greatly expand the hub area. By pushing the borders out, the hub will become much bigger and accommodate more people for viewing parades and fireworks.

In order to make this expansion happen, Disney is reworking the moats around the hub. Those moats closest to Main Street USA will actually disappear. Other areas that currently hold grass will become paved so people have more places to stand.

The construction has already started and is planned to continue through 2015. Overall, I think this is a good idea since the evening crowds in the hub are overwhelming. However, there is a cost to pay for this expansion.

It is hard to say exactly how the hub expansion will impact the surrounding areas, but it definitely means there will be changes.

Based on the video from Disney, it appears that that pathways through the Plaza Rose Garden may disappear. I speculate that Disney will keep some elements from the rose garden, but that after the hub expansion the rose garden will be much smaller and much different.

Let’s take a look at the Plaza Rose Garden while we still can.