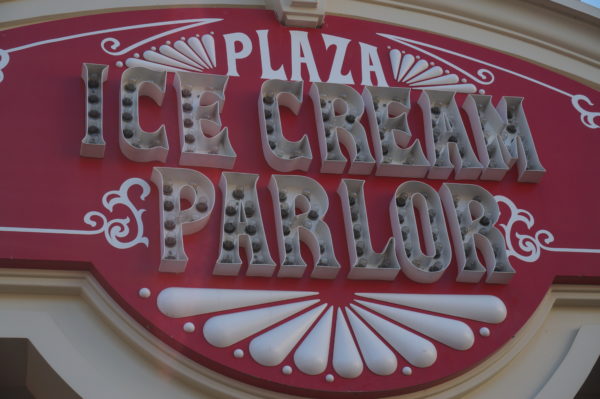 Plaza Ice Cream Parlor was an opening day location on Magic Kingdom‘s Main Street USA. In fact, this old-fashioned ice cream parlor could be on any Main Street in America in the early 20th century, and it was directly inspired by Walt’s childhood experiences.

Plaza Ice Cream Parlor is conveniently located at the end of Main Street USA in the Hub just before you turn right to go to Tomorrowland. It’s across from Casey’s Corner. The ice cream is delicious, and it’s location allows for perfect viewing of the afternoon parade and the nightly fireworks. Just be aware that everyone likes this spot, so the lines can get very long just before the fireworks, and the outside seating area can get very busy!

On opening day, the location was called Borden’s Ice Cream Parlor, and Borden’s Ice Cream was the sponsor. This sponsorship ended in 1981 when Borden decided not to renew their contract.  Sealtest, now discontinued, stepped up to sponsor the parlor. In 1993, the Sealtest sponsorship ended when the company was purchased by Kraft, and the parlor was briefly unsponsored. In the same year, however, Nestle took over sponsorship, and Edy’s, which is owned by Nestle, now hosts the parlor.

As Borden’s Ice Cream Parlor became very popular, they had to add wait staff service in 1973. However, this was a precursor to what would happen just seven years after the parlor opened; in 1977, the large seating area which formerly served visitors of the ice cream parlor was now walled off and made into a restaurant: The Plaza Restaurant.

Few changes have been made to the appearance of either dining location since then, but it’s alright because the art nouveau décor fits the time period and theme. The Plaza Restaurant is one of the most affordable table-service dining locations in the Magic Kingdom.

The Plaza Ice Cream Parlor currently serves only ice cream, but there are several varieties from which to choose. They sell hand-dipped ice cream in cones, floats, and waffle bowl sundaes, plus they have lots of toppings like hot fudge, peanut butter sauce, and cookie “ears”. Among the ice cream flavors are even some no-sugar added, non-fat, and vegan options like Tofutti and Rice Dream.

May I recommend a classic, though? The Plaza Sundae with vanilla ice cream, hot fudge, whipped cream, and cherries in a waffle bowl is quintessential and almost makes you feel like you’ve traveled back in time to the days of an easier and slower lifestyle.

Everything here is a “snack” and is credited as such on the Disney Dining Plan.

The Citizens of Main Street make appearances several times a day. They interact with guests on the street, pose for pictures, and make the whole area feel even more authentic. Sometimes they even make their way into the Plaza Ice Cream Parlor and The Plaza Restaurant for a quick visit.

Ever visit the Plaza Ice Cream Parlor in the Magic Kingdom?