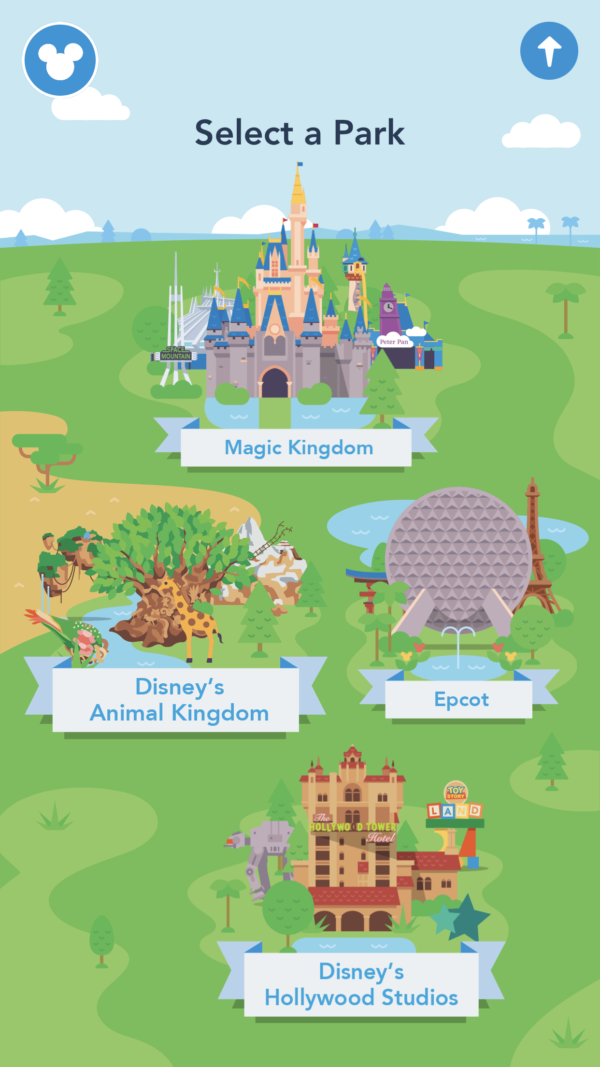 It’s a big week for Disney!

At the forefront of everyone’s mind is the grand opening of Toy Story Land in Disney’s Hollywood Studios, but another really cool thing is happening at the same time: the new Play Disney Parks app is now available for download.

Disney launched this app as a pre-order a few weeks ago with just a few pictures, but now we can actually see what all the hype is about!

The Play Disney Parks app has a whimsical Mary Blair look and feel. It’s very artsy with bright colors and fun designs showing some of the most prominent attractions in the parks. For example, when you’re in the Epcot section, you’ll see that Spaceship Earth has a rainbow effect.

There are also some neat hidden elements, dare I say Easter Eggs. If you pull to the edge of the game board, you just might see a character hanging around! In Magic Kingdom, it’s Stitch. In Epcot, it’s Figment. This is Disney, though, and this app is designed to be dynamic, so don’t be surprised if you see something different when you check in!

The current design took several years and collaborative effort from several teams around Disney to create. The Cast Member that I spoke with said the biggest challenge was thinking about how the app interacts with everything in the park – not only from a development perspective but also from a guest’s perspective. It had to be good and appropriate for everyone but at the same time not diminish the value of being in the park itself.

On the gameboard, you’ll see different markers; each one represents a different kind of experience type.

Music Note: If you tap on the music notes, you’ll get a customized music playlist for that location. In the parking lots, you’ll find the Road Trip Tracks with selections like Life is a Highway by Rascal Flatts, Drive by the Jonas Brothers, and Come Sail Away by Olivia Holt. At Disney Junior Live! On Stage, you’ll see songs from Disney Junior shows like Mickey and the Roadster Racers, Muppet Babies, Puppy Dog Pals, Princess Elena of Avalor, and Doc McStuffins. You can play the songs by tapping on them and add any of these songs to your iTunes playlist just by tapping the “+” next to the song. Music is available inside and outside of the park.

Question Mark: The question mark represents trivia games tied to their location.  Who doesn’t like trivia, right?  For example, if you tap the question mark near the Partner’s Statue in Magic Kingdom, you’ll get some general questions about the history of Disney like “What were the first words that Mickey spoke?” and “How much do the draft horses weigh?” In Disney’s Hollywood Studios, you’ll find trivia questions for both Toy Story Land and Star Wars: Galaxy’s Edge. These are also available regardless of location, so brush up on your trivia before hitting the parks!

Stars: Star game markers show where achievements can be earned. You can earn achieves for riding attractions, see your achievements in your trophy case, and share them on social media. In order to earn the achievement, make sure your app is open and logged in to your account. Bluetooth must be enabled, and your location services must be on “Always Allow”. Once you’ve finished your ride, you’ll automatically earn the achievement!

Agent P: Disney has even incorporated some familiar games into the new app like the Agent P World Showcase adventure where guests try to crack clues and defeat Dr. Doofenshmirtz. You can find clues in China, France, Germany, Japan, Mexico, and the United Kingdom! Now, instead of getting a text message, you can just get the clue right from the app! This experience is only available within the parks.

Attraction-specific: There are larger game markers on the game board that are attraction specific. These include things like Toy Story Mania in Disney’s Hollywood Studios, Soarin‘ in Epcot, and Maharajah Jungle Trek in Disney’s Animal Kingdom. Some of the games are available outside the parks, but others are only available inside the parks because Disney created new construction within existing rides to make them more interactive. For example, inside Space Mountain, the game encourages you to build your own spaceship then you can race this spaceship on the ceiling of the attraction in the queue line with other guests who are also waiting in line!

The Cast Member that I interviewed worked as a designer on this app, and one of her favorites is the new Peter Pan’s Flight game where guests have to collect happy thoughts and help light Tinkerbelle’s lantern. She said that this new construction is not obtrusive, but it looks like it’s been there forever. It might be one of those details that you say, “I’ve never noticed that before” and you haven’t because it was never there. Once you complete the challenges, you’ll earn an achievement like the ones discussed above in stars.

The Cast Member I interviewed said the purpose of Play Disney Parks is to extend the story of the attraction by allowing families and groups of friends to play games together on one device. Instead of each person looking at their own phone and not really being together, Play Disney Parks is a collaborative effort to complete a task while staying engaged with each other and with the attraction. It also increases the immersive nature of Disney.

I was happy to hear that the app is designed to encourage interaction with the park and with others in their traveling party.  I was concerned that the app would cause more people to stare at their phone, alone even when with friends, family, and in a huge crowd.  That won’t be the case.

The app is great especially for frequent visitors because the more you play, the more you earn, and the more opportunities you unlock. You can also expand on what you’ve noticed before and maybe learn something entirely new whether it’s your first time in Disney or you’ve been visiting for 50 years.

Play Disney Parks app? Will you use it?