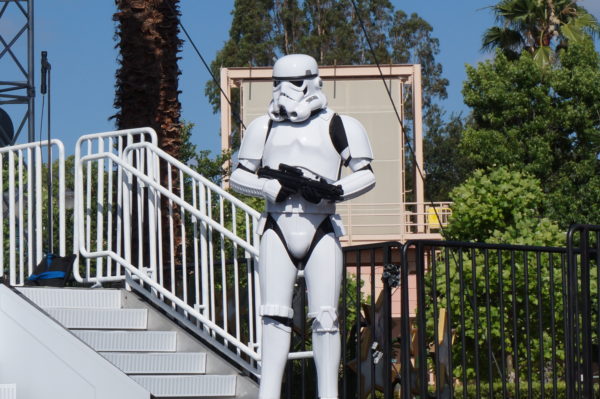 The Play Disney Parks App was released last year with a variety of fun opportunities like music, interactive games, and the ability to earn badges and achievements. When Star Wars: Galaxy’s Edge opens in Disney World’s Disney’s Hollywood Studios this August, Play Disney Parks will have a special interface for those visiting Black Spire Outpost.

Your smartphone will immediately become your “datapad” for making sense out of the strange new land you’ve found yourself in.

There are alien languages both written and spoken, shipping crates with encrypted codes, and broadcasts revealing what’s going on between the First Order, the Resistance, and even rogue gangs.

The new interface looks very mechanical – kind of like an old radio with options to Hack, Scan, Translate, and Tune. You can also take on jobs and boost your profile.

Let’s take a look at some of the interactive options of the new Star Wars: Galaxy’s Edge Play Disney Parks Interface!

The First Order has installed surveillance devices all around the Black Spire Outpost to monitor comings and goings. With the Resistance fighting back, they wouldn’t want the First Order to know where they are or what they’re doing.

As you travel around the area, you can use the Play Disney Parks app to hack into these devices, solve a simple puzzle, and either deactivate the box to help the Resistance or reactivate it to help the First Order.

According to sources, a winner will be declared each day based on guest’s actions.

There’s a bunch of junk lying around this spaceport. Some of it is valuable cargo. With your datapad, you can scan the shipping containers and reveal what is hidden inside. This information can help you solve puzzles and fill in blanks of the story.

As you can imagine, with so many different kinds of characters in one place, there are lots of alien languages floating around. Fortunately, you can use your datapad to translate languages both written and spoken.

This option is helpful when scanning the above-mentioned shipping crates, which might have alien languages and be encrypted in which case you’ll have to solve a puzzle to reveal the meaning.

You can also use the translate function to understand what some native aliens are talking about!

The final function available on Star Wars: Galaxy’s Edge datapad is the Tune function. This one works very much like a radio, and you can use it to listen in on communications taking place in the land and uncover stories and secrets. It’s very much like eavesdropping on both sides! Actually, you can listen to communication from the Resistance, the First Order, and underworld gangs who inhabit the area.

Transmissions can be picked up on antennas that are scattered throughout the land. Some transmissions are easily translated, but others will require solving a puzzle to unscramble and decode them.

The datapad will also allow you to take on jobs and use the functions of the device to perform such jobs. Disney says that you won’t choose whether you’re on the dark side or the light side, but your actions will show which side you support.

When you take on jobs, you can earn points and rewards for the tasks that you complete. Again, this personal involvement will add to your profile and strengthen your support of either side or neither side!

For each job that you complete, you’ll not only build your own identity, but you’ll also receive digital rewards. These will be similar to the kinds of achievements you can already achieve, but they’ll help make even more sense of the story unfolding around you. You can earn ship schematics, star maps, galactic credits, and more!

Will the datapad make your visit to Galaxy’s Edge better?