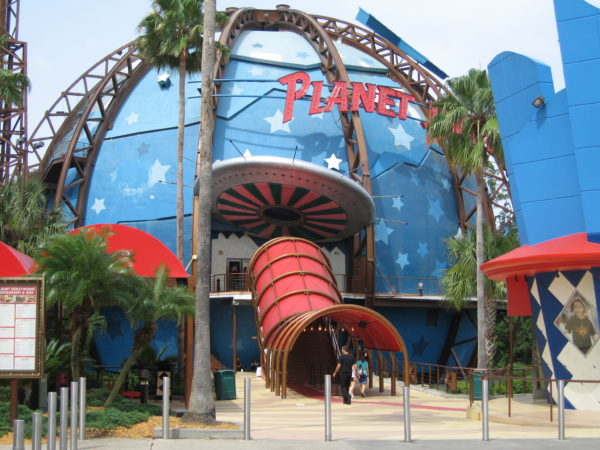 Planet Hollywood opened in 1997 as a 1990s themed restaurant with all kinds of memorabilia from movies and music. It was a pop culture icon for years, but it soon became outdated. The restaurant closed in 2016 and underwent a $25 million dollar makeover.

The renovation was expected to be completed by June 2016, but there were construction delays that put the opening off until recently. On January 27th, 2017, the flagship location opened in Disney Springs after a year of renovations!

The new Planet Hollywood Observatory is a four-story structure with brick and stone on its face, but it retains the globe shape on top. Inside is a vintage design with technological accents and of course Hollywood memorabilia. One notable addition is the 4500 square foot wall with a low-resolution background and projection leading to a real 3D look dubbed “trompe l’oiel” or “fools the eye.” The whole place definitely has a more theatrical than pop culture feel.

There’s an outdoor terrace at the base, which will house Stargazers Lounge where you’ll find live entertainment and Florida craft beers, 20 of which are on tap, plus ten signature cocktails.

The menu has also gotten a makeover. You’ll find some old favorites like Chicken Crunch tenders and Nachos Grande. Chef Guy Fieri joined the team to create impressive burgers like the Bacon Mac-N-Cheese Burger, the Mayor of Flavortown, The Tatted Up Turkey Burger, and The Original Ringer. Save room for dessert because the hand-dipped milkshakes are out of this world!

The restaurant is open for lunch and dinner daily taking Advanced Dining Reservations from 11am to 10:45pm.