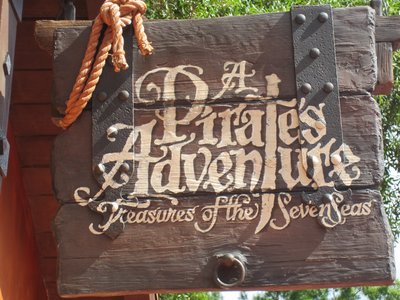 Inspired by the ride which spawned a movie which spawned an update to the ride, Disney has opened its latest interactive game – A Pirate’s Adventure: Treasures of the Seven Seas.

The story of the game is that you are a pirate recruit and you set off on an adventure that include several different “raids” or interactions at game stations throughout Adventureland in a quest for treasure.

Let’s take a look at the game.

You register for the game in a small building not far from the Pirates Of The Caribbean attraction itself. You can register with your theme park ticket, or you can receive a “talisman” that acts as your tracker for the different game stations. You enter the number of people in your party on a screen, get instruction on your first game station, then grab a map and off you go.

The game fits nicely into the Adventureland theme. 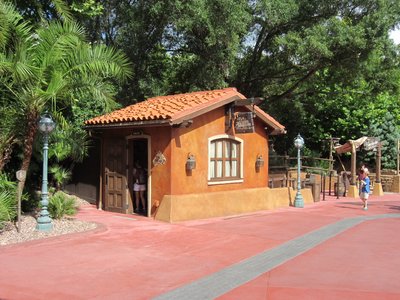 This small building is where you sign up and get a map.

At each station your hold up your ticket or talisman to a RFID reader on the game station. You are then rewarded with some type of action – from a shooting cannon to a talking parrot. You then get given instructions on where you need to go next. 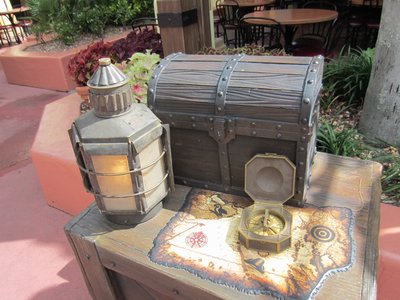 This game play station with a compass is near the Tortuga Tavern. 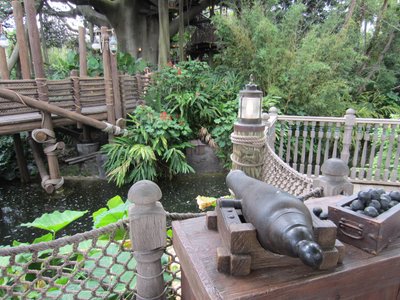 It wouldn’t be a pirate game without a cannon.  This one billows smoke. 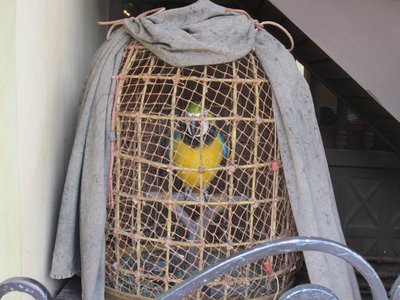 This talking parrot is lots of fun.

This new game is different from Sorcerers of the Magic Kingdom game. That game involves collecting cards and using some type of strategy (although just what that strategy is, I’m still not sure).

This new pirates game is more like the Phineas and Ferb Adventure game in the World Showcase area of Epcot. You get instruction on where to go, activate some type of motion, and then move on to the next location.

There is no cost to play the game. It is included in the admission price to the Magic Kingdom.

Would you like to receive a map from the game in the postal mail? I have one map which I can send to one lucky winner. Just send an e-mail to me at [Sweepstakes is closed – congratulations to the winner Happie from New Jersey]. I’ll add you to our mailing list (if you aren’t already on it) and enter you into a drawing to receive a map from the game. I’ll select one recipient on or around June 13, 2013. I’ll request your mailing address and then send the map to you. It’s that easy! This give-away is open to everyone, everywhere. 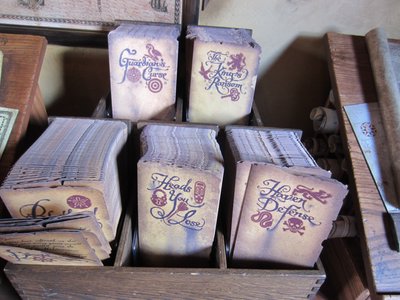 The game map is nicely done and shows you where the stations are located.

What do you think about the Pirate’s Adventure Game?