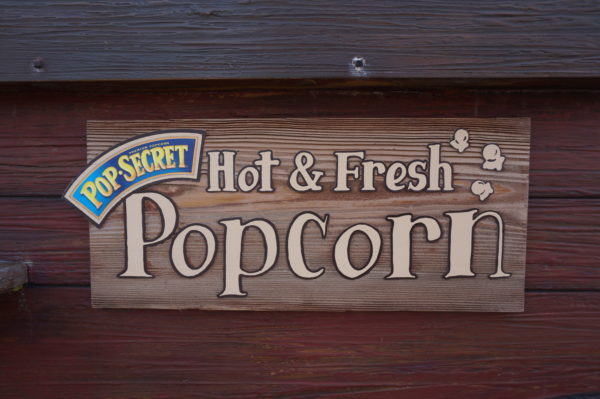 Simple enough?  Check out my opinion, then let us know what your three favorites are in the comments section!

They say that our sense of smell is more closely related to memories than any of the other senses. Everyone has a smell that can bring them back to a time or place that may be years in the past or otherwise long forgotten. Imagineers understand the connection between a guests’ sense of smell and memories and use this to create an immersive atmosphere. Scents have been used in the development of attractions and areas of the park. The scents from the parks have become so iconic that their recreation is big business in the form of candles, air fresheners, or wax melts.

1 – Pirates of the Caribbean (Magic Kingdom)

There is no doubt that one of the most iconic scents in all of Walt Disney World is the aroma of the water in the dark rides, most notably in Pirates of the Caribbean.

Whether it’s your imagination telling you that it’s the smell of fresh saltwater or if it’s your more logical side telling you it’s the cleaning agent (plus mildew) combined with other elements, you remember that scent.

As you enter the queue at Pirates of the Caribbean, you are immediately hit with that cold air and the iconic smell. For me, whatever concoction makes this what it is (cleaning agent or not), it triggers my earliest Disney World memories. There aren’t too many other scents in the parks that trigger my memories like the water in Pirates of the Caribbean.

There’s no shortage of popcorn carts scattered around all the parks at Walt Disney World. If you follow the Disney Parks social media scene, you’ve probably have seen pictures of all the collectible popcorn buckets that have become increasingly popular. Unfortunately, Instagram hasn’t created a way to smell pictures, so as good as the popcorn looks, you still don’t get the experience of smelling its buttery goodness.

The reason I chose the carts at Disney’s Hollywood Studios over all other parks is that I feel like here is where the scents are the strongest. If you’re in the Center Stage area near Mickey and Minnie’s Runaway Railway (formerly Great Movie Ride), you can’t help but smell fresh popcorn. There seems to always be a number of popcorn carts strategically placed in this area, all of them with a strong buttery scent. For me, I smell where I am before I realize where I am when I walk into this part of Hollywood Studios.

If Pirates of the Caribbean is the best example of a memorable scent at a Disney Park, then Soarin’ is the best use of the technology in general.

Soarin’ is the only attraction at the parks, that I know of, that uses multiple scents for the purpose of immersion. The goal of Soarin’ is to make you feel as if you are truly flying over various countries around the world. One way Imagineers can capture this feeling is by tapping into your senses. While on Soarin’ you see, feel, and smell all the elements. From the smell of grass in Africa to jasmine in India to tropical scents in Fiji, the smells truly add another degree to the attraction.

We do have one honorable mention for this edition of We Pick Three. We know the rules state we can only pick three items, but the Gingerbread scent at Christmastime is so memorable that it deserved an appearance on the list. However, because the scent is seasonal, it only gets an honorable mention.

Disney at Christmas is even more magical than normal, including the scents! Over the years, several of the Disney resorts have constructed giant gingerbread houses. One of the participating resorts is Disney’s Grand Floridian Resort and Spa. When you stand by the giant house, you notice a strong gingerbread scent that will be sure to put you in the holiday spirit! This smell at the Grand Floridian just might be our all-time favorite smell at Walt Disney World.

What are your three favorite Disney scents?