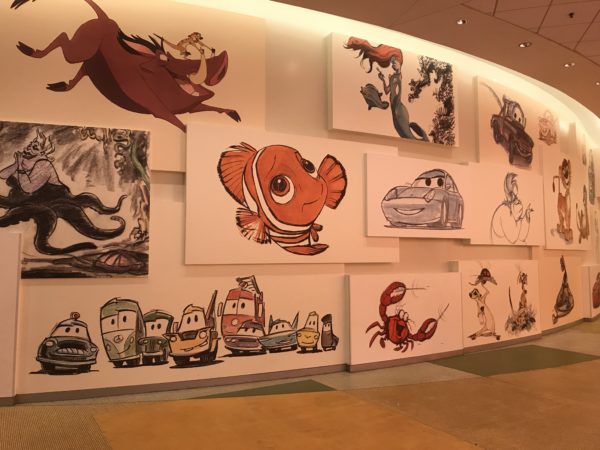 I’ve spent the last year planning a family vacation to Disney World with our almost-three-year-old son, my husband and me, and my parents. I chose Disney’s Art of Animation Resort for several reasons including that it is a value resort with mostly family suites and a zero-depth entry pool.

We were budget-conscious but wanted a comfortable living space for all of us. Plus, my mom has injuries to her legs, and I wanted her to have easy access to the pool along with my son being able to walk in and out as he pleases so he could have a real pool experience instead of us just holding him in the pool.

We really enjoyed our stay at Disney’s Art of Animation Resort, and I would like to share the resort with you!

Construction on Disney’s Art of Animation Resort began in 1999 as part of Disney’s Pop Century Resort, which is now located on the other side of Hourglass Lake.

Disney’s Pop Century Resort opened in 2003, but the resort across the lake stood empty. Disney resumed construction in 2010, and what we now know as Art of Animation started opening in phases in May 2012; it was completely operational by the end of 2012 with four areas themed for four Disney and Disney*Pixar movies: Finding Nemo, Cars, The Lion King, The Little Mermaid.

When you first arrive at Disney’s Art of Animation Resort, you’ll enter Animation Hall. This is the resort’s front desk and, like other Disney Value Resorts, holds the merchandise store and the food court.

Landscape of Flavors is said to be one of the best Value Resort food courts on property, and I would have to agree! The food was delicious. There was plenty of variety and the portions were quite large!

The Ink and Paint Store was really nice too! They have plenty of convenience items and lots of apparel. They also have some really cool toys that fit with the resort’s theme like Cars and Finding Nemo items.

Pixel Play Arcade was a lot of fun. We avoided the area for most of our vacation because I knew as soon as our son saw it, he would want to play, but I thought he wasn’t big enough for it. I was wrong! We had some time remaining before we had to catch the Magical Express, so we went in to check it out. I wish we would have tried it out sooner because he loved playing the games with some help. My husband also felt like a kid again while playing a snowboarding game!

When you leave Animation Hall, you immediately see the Finding Nemo section of the resort.

The Big Blue Pool shrinks guests down to the size of Nemo. It’s the largest pool on Disney property, and as I mentioned above, has a zero-depth entry on the far side with depts up to five feet. This was fantastic for our son who is very tall for his age but not yet a swimmer.

The Schoolyard Sprayground was also a hit! He loved splashing in the water fountains!

The Finding Nemo rooms reflect the theme, and there are lots of larger than life characters like Crush and Dory scattered around the area!

If you turn to the right of Animation Hall, you would run into the Cars-themed area. This was probably our son’s favorite area because of all the Cars characters.

Besides the characters, the Cars area features the second of three pools for the resort. The Cozy Cone Motel pool has a laundry room with vending machines and a pool just outside.

We stayed in the Lion King Family Suites, which is just to the left of Animation Hall. There’s no pool in this area, but there are several massive statues of characters including Rafiki, Mufasa, Zazu, and Timon, Pumbaa, and Simba on a log overhead.

There is also an Elephant Graveyard (complete with hyenas). Our son loved this area, which doubles as a playground!

The accommodations were very nice, and the family suite was quite convenient for our trip!

The 864 Little Mermaid Rooms are the only ones at the resort that are standard rooms, which makes this resort a value resort instead of a moderate resort even though the 1,120 family suites are more moderately priced.

When Disney decided to make Art of Animation an all-suites resort, instead of tearing down the existing buildings, they decided they would just use these buildings as they were and give them a different theme.

The area now has three buildings, so Disney had to construct a third building in the same motel style, and in between all three buildings is the resort’s third pool- Flippin’ Fins!

These rooms are the farthest from Animation Hall and are also less expensive both for this reason and because they are standard, motel rooms.

Disney did, however, continue the theme with large character statues and bright coloring.

Have you stayed at Disney’s Art of Animation?  What did you think?