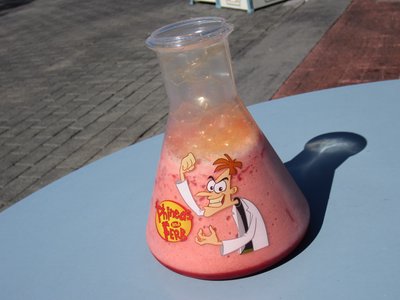 Fun Phineas And Ferb Food At The Fife And Drum (Photo)

Disney continues to offer up fun food choices throughout the resort. First there was LeFou’s Brew in the new Fantasyland section of the Magic Kingdom. Then came the $9 cupcake in a treasure chest at Disney’s Hollywood Studios. Now we get a Phineas and Ferb drink and cookie in the World Showcase section of Epcot.

The Doofenslurper is a frozen drink. The drink takes its name from Dr. Doofenshmirtz, the hilarious evil scientist in the Phineas and Ferb animated show on the Disney Channel.

What’s In A Name

Some people posting on internet boards have argued that the drink should be called a Doofinator or a Doofensmirtz’s Slurpinator, since Dr. Doofenshmirtz loves to name his creations as “whatever-inators”. However, remember that according to the show naming conventions that an “inator” is a machine that creates or destroys. So the drink itself would not properly be called an “inator”. This means the Disney Cast Members are probably using a Slurpinator to create the Doofenslurper. Really, it all makes sense from a naming perspective.

Ok, I’ve got to admit that the title of this title wasn’t complete – the Doofenslurper is available not only at the Fife And Drum near the American Adventure, but also at Cool Post in the Africa Outpost and at Promenade Refreshments. I just couldn’t resist a headline with all those “F” sounds.

According to the Disney Parks blog, there are three flavors, each available at different locations:

When I ventured into World Showcase, the drink was not well advertised, although I have seen other pictures on the internet of sandwich boards advertising the drink.  Also, when I ordered my drink at the Fife and Drum I was offered all three flavor choices – even through the Disney blog reports that Lemonaid isn’t available at the Fife and Drum.

The flavor of the drink itself was very good.  And like all slushy drinks it was very cold – you can’t drink it too fast or you will get a brain freeze.  Someday I’ll learn that lesson.

An interesting piece of trivia is that the flask is made by Whirley DrinkWorks! and you can even order your own flask directly from the manufacturer – but with a minimum order of 5,000.

What do you think about the Doofenslurper?