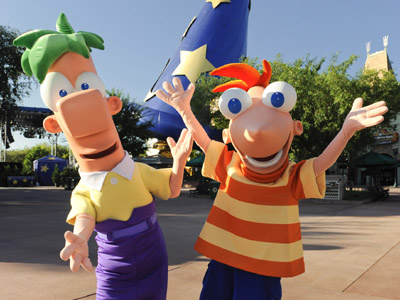 Since early 2009 Epcot has hosted the Kim Possible World Showcase Adventure.  There is where you get a “Kimmunicator” (which is actually a Motorolla i870 phone) and head out on a mission to save the world.  Along the way you get to interact with many of the elements of World Showcase.  While the basic game is unchanged, the characters will change.  It is time to say good bye to Kim Possible, a show which ran from 2002-2007.

And with Kim’s departure we will say hello to Phineas and Ferb, the stars of the Disney Channel animated series that started in 2007.  The new name of the game will be Disney Phineas and Ferb: Agent P’s World Showcase Adventure.  Tom Staggs, the Chairman of Disney Parks and Resorts, made the announcement in an interview with Travel Weekly (Source).

If you aren’t familiar with Phineas and Ferb, they are two boys who set out on adventures that include annoying their sister Cadance and weaving in a sub-plot with Perry the Platypus. Given that the Phineas and Ferb television series has been extended until at least 2014 and there is discussion of a movie, it makes good sense that Disney is switching characters.

Phineas and Ferb already have a presence at Disney Parks.  They have a meet and greet at Disney’s Hollywood Studios, and they also host a party at Disney’s California Adventure.

As part of the change over, Disney will rename the Kimmunicator to a “high-tech secret agent device”.  The game will continue to take place through the Epcot countries of the United Kingdom, France, Germany, Japan, Norway, Mexico.