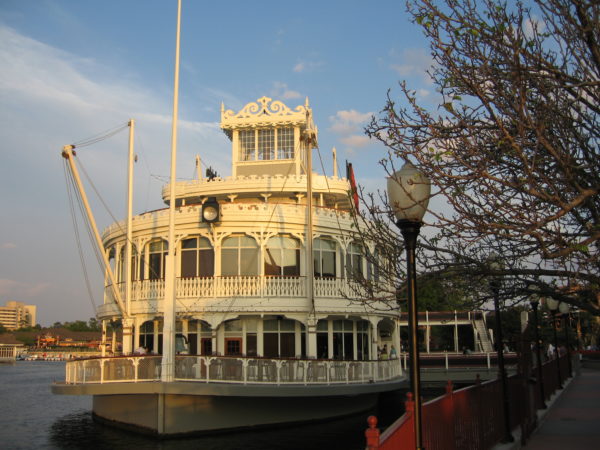 Paddlefish Opens for Lunch and Dinner

When Fulton’s Crab House closed in 2016, some diners wondered what would become of the unique building that was first christened by Walt Disney’s widow, Lillian Disney, as Empress Lilly in 1976.

When it first opened, there were four separate entertainment and dining areas, smokestacks, and a paddlewheel.

When Levy Restaurants took over in 1995 and renamed the restaurant Fulton’s Crab House, those things were removed because they were outdated, rusted, and rotted. While they were not replaced, the 220 foot long, 62 foot wide boat-shaped building transformed and welcomed happy guests for 20 more years.

Now, Fulton’s has been completely reimagined as “Paddlefish” located at Disney Springs‘ The Landing.

The name is appropriate to the new theme of Disney Springs since paddlefish are native to the Mississippi River. They are ancient fish, highly adaptive to their surroundings and can live in rivers and lakes in many different climates.

So after a multimillion-dollar transformation, Paddlefish opened on February 4th. The building itself has been reimagined into a modern yacht with clean lines, crisp designs, refined woods, and blue and gray colors giving it a high-end, sophisticated feel.

When it comes to the menu, diners will love the new plates and some favorites from Fulton’s. New to the menu is Maine Lobster, King and Snow Crab, Sea Bass, Catfish, Salmon, and Lobster Guacamole, which is made in house. Paddlefish will also bring back Lobster Corn Dogs and Crab Legs from its predecessor.

Paddlefish is open daily for lunch and dinner and serves brunch on Sundays. Advanced Dining Reservations are highly recommended since this Signature Dining restaurant will fill up quickly especially since it’s new!