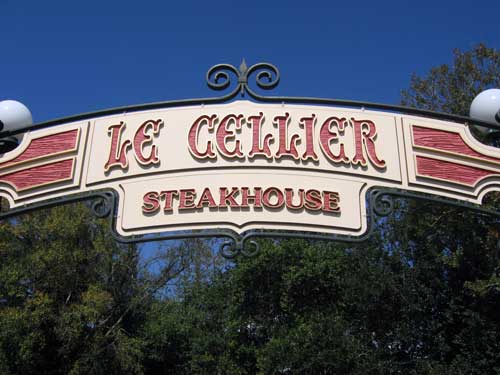 Walt Disney World isn’t just my favorite vacation spot on the planet, it very well may be my favorite place on the planet, period! I love almost everything about it including the resorts, theme parks, attractions, and restaurants.

Of course, that doesn’t mean I love every single thing about the place.

To be quite honest, there are some restaurants in Walt Disney World that I think aren’t quite worth all of the praise and “hard to get reservation for” statuses that they have.

Let’s get one of the big ones out there in the open right away! There’s a lot to love about Chef Mickey’s: the character interaction is fantastic, eating a meal in the Contemporary can’t be beat, and there’s nothing quite like seeing that monorail whiz by over your head while you’re sitting back and enjoying yourself.

My main gripe with Chef Mickey’s is the food. Honestly, it’s not that great.

I don’t need Disney’s breakfast food to knock my socks off when the rest of the experience is fantastic, but I need it to be just a little bit better than it is at Chef Mickey’s. I might be one of the only ones who doesn’t love it, of course, since a reservation here is still one of the toughest to get anywhere on Disney property!

Where I go instead: My family and I head over to Disney’s Animal Kingdom for our character breakfast at Tusker House. The food is fantastic, the characters are great (although there aren’t as many as Chef Mickey’s), and after breakfast we usually have a FastPass scheduled for Kilimanjaro Safaris when the animals are still pretty active!

My best tip is to get reservations here about a half hour before a parade starts, then when you check in for your reservation, ask the Cast Members if you can be seated on the patio outside and tell them you’d be happy to wait until one becomes available.

That being said, if you’re truly in the mood for Italian food, I’d say that you might be a little bit disappointed in Tony’s selection. Tony’s Town Square offers a bit of an Americanized version of Italian food, and while that might be okay if you’re primarily there to see a parade, I don’t want you to be disappointed in anything while on your Walt Disney World Vacation!

Where I go instead: For really good, really Italian food, try Via Napoli in Epcot’s Italy pavilion. The food is excellent and the pizza is the best pizza anywhere in Central Florida!

It actually pains me a bit to add Le Cellier to this list because I honestly love this place so much! The atmosphere is amazing, the food is great (if you haven’t had the Canadian Cheddar Cheese Soup here, you are missing out on something truly fantastic! A good tip is to go to Epcot when the Food & Wine Festival is going on where you can find this soup in the cart outside in the pavilion!)

The reason I did add Le Cellier to this list, however, is the steaks are really good – but they aren’t the best on Walt Disney World property, in my opinion of course.  However, forget about trying to get a reservation there less than 180 days before your vacation! It’s still one of the hardest reservations to get on property, and honestly there are some better steaks around that aren’t that difficult to get!

Where I go instead: If you’re talking steak in Walt Disney World, there are two places you’ll absolutely have to try: Shula’s Steak House at the Walt Disney World Dolphin and the Yachtsman Steakhouse over at Disney’s Yacht Club Resort!

For a place that I’m calling overrated, I sure have eaten at the San Angel Inn an awful lot in my life! The food is good, the service is great, and the atmosphere is awesome (you even get the boats from the Gran Fiesta tour attraction floating by while you’re eating which is very reminiscent of Pirates Of The Caribbean and the Blue Bayou Restaurant out in Disneyland).

Where I go instead: The reason I call this one overrated, though, is that I like the experience outside at the La Cantina De San Angel a little bit better. There’s something very fun and festive about sitting outside by the World Showcase Lagoon, munching on some nachos or tacos, sipping a margarita, and taking in all of the sites and sounds around you. This is especially true if you happen to land one of these coveted tables before Illuminations starts at night!

I can feel you getting upset with me as you’re reading this! I think your thought process went something like this: “WHAT?! Cinderella’s Royal Table is amazing! You get to eat a meal inside Cinderella Castle WITH Cinderella!”

I know, I know. Yes, eating a meal at Cinderella’s Royal Table is an absolutely amazing, once-in-a-lifetime experience. Everyone should do it at least once. But honestly, to me, it’s the most overrated meal in Walt Disney World.

One thing, the price. This dining experience is very expensive and in my honest opinion, you can have a similar experience somewhere else.

Where I go instead: 1900 Park Fare. Yes, it’s a buffet, so the food isn’t even close to quality that you would get at Cinderella’s Royal Table. Here’s the deal though, the buffet has an excellent selection and one of the best dessert stations in all of Walt Disney World! But for my money, the character interaction at 1900 Park Fare with Cinderella, Lady Tremaine, Drizella, Anastasia, and Prince Charming can’t be beat!

Walt Disney World is loaded with fantastic restaurants and I really think you have to try as many as you can to form your own opinions. While I think these are overrated, I’m sure there are quite a few of you reading this right now that totally disagree with me! If you do, please let me know! Also, if I didn’t mention a restaurant that you think is totally and completely overrated, please let me know about that one as well. As always, thank you for reading!

Which Disney World restaurant do you think is most overrated?