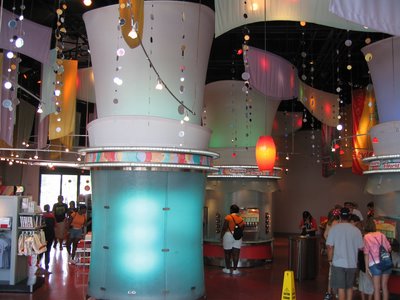 Whether you are visiting Disney World for the first time or the hundredth time, if you are like most folks you rush from major attraction to major attraction – taking in the “E ticket” draws like Space Mountain at the Magic Kingdom, Soarin at Epcot, and the Tower of Terror at Disney’s Hollywood Studios.  Those attractions are admittedly awesome.  Let’s take a look at some of the overlooked treasures at Disney World – easily missed but definitely worth seeking out.

Ever since I was a kid one of my favorite attractions has been The Carousel of Progress.  The story of progress told through an American family is timeless, even if the final scene that represents today is a bit out of date.  This attraction has amazing history – being one that Walt personally worked on as part of the 1964 World’s Fair.  The music and unique design of the moving theater make this a classic.  There have been rumors for years about the eminent demise of this classic.  Be sure to check it out on your next visit, while you still have a chance.

Another Magic Kingdom goodie is Tom Sawyer Island.  There aren’t any high tech design elements – just paths, forts, and caves from the classic story that come to life.  It’s a great place to wander, enjoy the shade, and get away from some of the pressing crowds that tend to fill up the walkways around the Magic Kingdom.

If I told you that you could get a free lesson in the cultures of the world while enjoying free soda, would you be interested?  In Club Cool you can try out free sodas from around the world, on the house, courtesy of Coca Cola.  From tame ginger ales to a bizarre Italian soda called Beverly (consider yourself warned), you can try out some unique tastes, quench your thirst, and do it all for free.

What if you could get a free art lesson and walk away with a hand drawn Disney character, all for free, would you be interested?  And if I told you that, even if you have no artistic talent, that you could personally draw a pretty good Disney character yourself, would you believe me?  Believe it.  The talented and patient cast member at the Animation Academy (located near the exit of the Art of Animation attraction) will show you, step by easy step, how to draw a Disney character.  You will be amazed at how good it looks in the end, and you can take the paper home with you as a souvenir of both the experience and your newfound artistic talent.

Many folks lament the lack of things to do at Disney’s Animal Kingdom. Well they must not be looking very hard.  Aside from two terrific Broadway quality theater performances in The Festival of the Lion King and Finding Nemo, this park is host to a fun afternoon parade – Mickey’s Jammin’ Jungle parade.  It’s easy to get good viewing spots and the parade elements are built high up so that they are easy to see. Combine this with an amazing soundtrack and you’ve got another hidden treasure.