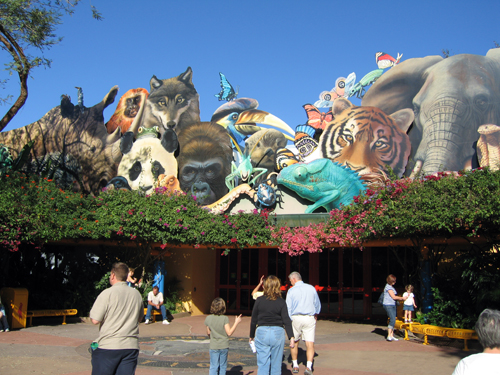 Unfortunately, many people view Animal Kingdom as a half-day park with little to offer except the thrill rides like Expedition Everest and Kali River Rapids and the big animal attractions like Kilimanjaro Safari.

Disney is working to change this viewpoint as construction continues on the new Avatar Land, Rivers of Light, and an expanded Kilimanjaro Safari, all of which are expected to open sometime in 2016.

However, the focus of today’s article is not the big things at Animal Kingdom but some little things that people often disregard in favor of the main draws.

When Imagineers planned Animal Kingdom, they envisioned a park in which guests would experience adventure like no other Disney Park. You can see this as a common thread in each of the following five attractions that people often overlook.

Rafiki’s Planet Watch and Affection Section may not be the most overlooked attraction at Animal Kingdom, but many people ignore this area, which happens to be the most educational section of the park, because it is difficult to get to. Blame Disney for this.

The five-minute train ride to get to Planet Watch isn’t bad since riders can see some backstage areas of the park, but it does seem pretty long. What’s worse is that the train runs every seven minutes at best, so a round trip could cost you up to 20 valuable minutes. Even more, there are no walking trails, so the train is your only transportation option to and from. But this is the only real downside.

Once you arrive at Rafiki’s Planet Watch, you’ll find an entirely different world than what you’re used to in Disney. The theme of this area is conservation, science, and nature. In fact, you’ll find very few “Disney” themes. Last time I visited, I saw a couple character meet and greets, but that’s it.

What you will see is a real, working veterinarian hospital, nutrition center, and behind the scenes animal habitats. You and your kids can view live veterinarian procedures and surgeries, find out what animals eat, and even learn how to build natural habitats in your backyard. Go outside, and you’ll find the Affection Section, home to dozens of domesticated animals including pigs, goats, sheep, and cows.

If you’re willing to take the time to get to and from Rafiki’s Planet Watch, you won’t be disappointed.

Many people walk right through Harambe Village on their way to Kilimanjaro Safari or Pangani Forest Exploration Trail without even thinking about the amazing theming that Disney placed here so eloquently.

Harambe often goes under the radar because its history isn’t obvious. In fact, it’s almost completely unmentioned. Next time you’re in Harambe, look down and you’ll see white bricks in the road. According to Disney theming, these bricks represent where an old European military stronghold once stood. It was a place where European settlers made home, and this is apparent from the rooftops lined with pots and pans and folded linens along with the sounds of staff doing dishes (which is a completely sensory effect).

The landscape is also an amazing part of Harambe Village because it showcases the various climates and cultures of Africa. When you enter Harambe, you’ll be in a Coastal West African town. As you approach the safari, you’ll find buildings with thatched roofs, hunting expeditions, and less vibrant terrain than what you’ll find as you head towards Pangani Forest Exploration Trail, which is a lush tropical rain forest. As is often the case, the backstory is built into the theming of the environment, so you need to discover it on your own.

Discovery Island is Animal Kingdom’s hub complete with the park’s unique icon, the Tree of Life, but that’s not all that is up on that hill. Venture up to the Tree of Life, and you’ll have an incredible vantage point of the park and the Tree of Life. The walking trails around the Tree will force you to get lost and completely remove you from the feeling of being in Central Florida. Duck into caves and coves, and you just might see some animals like kangaroos and exotic and rare birds.

Discovery Island is a great place for unique photo ops with fewer crowds. You also might escape the Florida heat since the area is shaded by huge trees and plants. Transport yourself to an island somewhere in the Caribbean, Australia, South East Asia, or even Africa. Discovery Island can be an island anywhere thanks to the art, architecture, and greenery that makes this place so beautiful.

Many people have probably heard of the previous attractions on this list, but few people have even heard of The Oasis. As I mentioned above, the original Animal Kingdom Imagineers set out to create a park in which people would get lost. The concept included or more appropriately excluded park maps, directional signs, and information booths. Disney Execs. didn’t like the idea of guests with fat wallets getting lost and even frustrated, so they vetoed this idea in favor of the hub and wheel design. However, The Oasis is the only place in the park where you can get an idea of what this would have been like. Create your own adventure as you wander through the rock caverns, waterfalls, rope bridges, and animal exhibits.

As the story goes, the new Dino Institute, which houses Dinosaur, was built near its predecessor. After all, if there is a “new” there has to be an “old,” right? Well, the old Dino Institute is now Restaurantosaurus. Thanks to the theming of this awesome restaurant, guests can still see the remnants of the one-time research facility since the dining rooms are the wings of the old institute including old barracks and a mechanic shop.

You see, this area was once home to paleontological interns, and they turned their cafeteria, now known as Restaurantosaurus, into an area for tourists to eat. Enjoy an Angus Bacon Burger, Black Bean Sandwich, hotdog, or chicken nuggets while you take in all that the students have left behind. There’s a lot of “memorabilia” here, and it’s a shame that many people skip over this unique dining spot and our number one hidden gem in Disney’s Animal Kingdom.