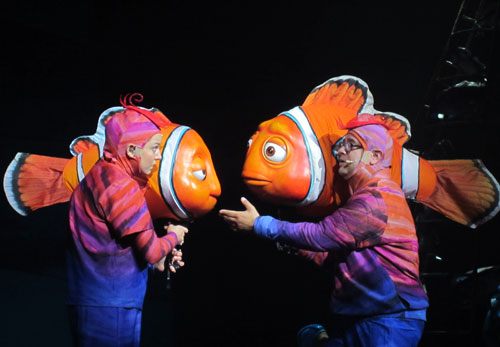 I don’t know about you, but when I start planning my family’s Walt Disney World vacation, I always start with the headliners. I make sure to reserve my FastPasses in advance for the big ticket attractions like Seven Dwarfs Mine Train, Toy Story Midway Mania, and Expedition Everest, and I can’t imagine taking a trip to the Most Magical Place on Earth and missing out on those fantastic attractions.

Here’s the thing though: it’s not always the most popular, brand new, state of the art attractions that stay etched in the brains of my family and I long after we get home from our vacation.

Sometimes the least popular, most-passed-by attractions are the ones we tend to never forget. So Don’t Overlook These WDW Attractions!

This is one of those shows that can be a little confusing for some guests. The movie Finding Nemo isn’t a musical, so how on Earth could the show be a musical? I have to admit I was a little skeptical the first time I walked into the theater to check out the show. Since that first viewing, I make it a point to see this show on almost every visit to Disney’s Animal Kingdom. The songs that were written for this show are so good they’ll make you wonder why the movie wasn’t a musical in the first place! The performers are amazing; they sing their songs and act out their parts while operating large puppets of the characters from the film (if you’ve seen Avenue Q on Broadway or elsewhere, it’s like that). Without a doubt this isn’t a show you should run right past on your way to Dinoland or Expedition: Everest!

Full disclosure here: I’m a Disney history buff. I love hearing all of the stories of the early days of Walt Disney and his dreams of making it in Hollywood. This walk through attraction is one of the most inspiring and interesting things in all of the Disney theme parks. It’s filled with true treasures of Disney history and really should not be missed if you’re a big time Disney fan. The items on display are swapped out occasionally so you never really know if you’ll have the chance to see them up close and personal again. One of my favorite things to do is wander through there with my camera and take just take in all of the incredible things around me. You’ll see an actual model of Disneyland’s Main Street USA from before the park was built, Walt Disney’s childhood school desk, costumes and props from several classic Disney movies, and much more. It’s really a must-do for me each and every time I’m in the park!

Turtle Talk with Crush at Epcot

Honestly, I never once watched this show before I had kids. It opened in 2004 and I walked by that theater for six or seven years before I even thought twice about going in. Now I know better! This is a fantastic show and you definitely do not need to have children to enjoy it. Here’s the quick rundown: you’re in a room with an “aquarium” when Crush from Finding Nemo swims up and starts interacting with the crowd. He can see and hear the audience and asks questions, answers questions, tells jokes, etc. The technology here is amazing and the animated, on-screen Crush interacts with both children and adults during the show. The best part is, no two shows are ever the same since the crowds inside and the questions that are asked to Crush are always different. Next time you’re exiting The Seas with Nemo and Friends, make sure you get right in line for this one!

The American Adventure at Epcot

I’m not going to go into too much detail here about this show. If you haven’t seen it, you just have to go! That’s it. You’ll be inspired, moved, touched, and come out of the theater with a ton of pride for the red, white, & blue!

One of the ALL TIME most overlooked attractions anywhere in the parks has to be the Liberty Square Riverboat. Again, I’m one of the guilty ones, I rarely ride this attraction when I’m in the Magic Kingdom because I have little kids and their attention spans don’t really allow for the time that this attraction takes. But, if you have kids with longer attention spans that I do or if you’re traveling without children, make sure to give this one a shot! It’s a quiet, relaxing tour around Tom Sawyer Island where you’ll get some fantastic views of Big Thunder Mountain, the Haunted Mansion, the island itself, and more. If you’re a photographer (professional or amateur, like me) make sure to bring your camera as I’m sure you’ll want to get some shots of these places that you won’t be able to get anywhere else in the park!

The Magic Carpets of Aladdin at the Magic Kingdom

If you know me, have listened to me on the World of Walt Podcast, or have read anything I’ve written before, you know I’m joking. This is Dumbo #2. Skip it.

Enchanted Tales with Belle at the Magic Kingdom

This one, despite being one of the newer attractions in the Magic Kingdom, is often overlooked by guests who think it’s just a meet & greet location. In reality it is SO much more than that! Enchanted Tales with Belle is actually a full show with phenomenal special effects, wonderful audio-animatronic characters, and fantastic guest participation. You basically get to sit in on the night Belle and The Beast fell in love. It’s a really fun show and I never come out of the theater without a huge smile on my face! If your kids want a big part in the show, try to get them to stand out in front when the cast member is choosing roles and encourage them to be a little loud and over the top. Those children are usually the ones who are picked to play The Beast, Maurice, Mrs. Potts, Chip, & more!

And these are just a few of the overlooked attractions in Walt Disney World! I didn’t even mention the Country Bear Jamboree, Monsters Inc. Laugh Floor, The Gran Fiesta Tour, and more! The thing is, the next time you are lucky enough to be in Walt Disney World, make sure you leave a little bit of time to experience attractions like these! They aren’t the headliners or the 90 minute waits, but you’re sure to make memories that you’ll never forget!

What is your favorite often overlooked attraction at Disney World?