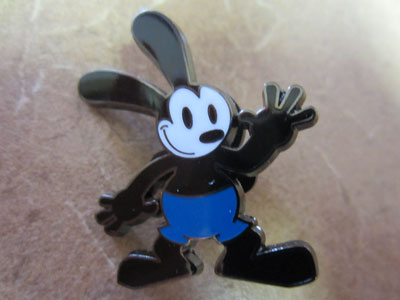 Walt himself worked on the Oswald character together with Ub Iwerks, who was Disney’s chief animator. Interestingly, Disney signed an agreement with Universal for the development of Oswald. The character got his name when it was pulled out of a hat.

The lucky rabbit became a hit and in 1927 overshadowed some of the more popular cartoon characters of the time, like Felix the Cat.

Charles Mintz, who was Disney’s distributor, opened his own animation studio by hiring away many of Walt’s artists and continued to make Oswald cartoons. Disney either lost control of or walked away from Oswald, depending on which version of the story you read.

Down and out, Disney needed a new character and he invented one on a famous train ride from New York to California. The new character’s name? Mickey Mouse.

Want to win an Oswald Disney Trading Pin?
Check out the entry instructions at the end of this article.

In 2006, Disney made a deal with Universal to reacquire the rights to the Oswald character and the Disney-produced Oswald films. Universal basically gave Oswald back to Disney in exchange for getting sportscaster Al Michaels to work on NBC football.

Oswald regained notoriety after appearing in the 2010 video game Epic Mickey. Disney has been doing more and more with Oswald, and now you can find Oswald the Lucky Rabbit merchandise in the Disney parks.

The Mickey’s of Hollywood merchandise shop on Hollywood Boulevard in Disney’s Hollywood Studios caries quite a bit of Oswald merchandise. Let’s take a look:

Would you like to win an Oswald Disney trading pin?

To win, just send an e-mail to me at [This sweepstakes is closed – Congratulations to the winner of the Oswald Pin – Ed from New Jersey!]. I’ll add you to our mailing list (if you aren’t already on it) and enter you into the drawing. One lucky winner will get this Oswald Disney trading pin. I’ll select one recipient on or around March 14, 2014. I’ll request your mailing address and then send a prize to you. It’s that easy! This give-away is open to everyone, everywhere.

Would you like to win an Oswald trading pin?