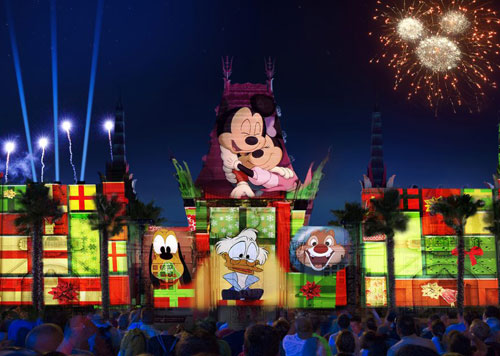 Check out the Osborne Lights Replacement at Disney’s Hollywood Studios

Visiting Disney World during Christmastime is a magical experience. There are gigantic Christmas trees at all of the parks and Disney resort hotels, and virtually every inch of the resort is decorated. Guests are delighted to see the glittering lights on Magic Kingdom‘s Cinderella Castle and the simple beauty of Main Street USA.

Disney is constantly working to keep things fresh, and this year they’ve added a new Christmas light show that is sure to entertain.

In 1986, the Osborne family started decorating their home in Little Rock, Arkansas. Their light show grew larger every year starting with 1000 lights and growing to over three million lights. While they were a popular attraction locally and globally, neighbors complained that the display was dangerous and inconvenient.

When Disney heard about the legal issues, they decided to purchase the entire display and bring it to Disney’s Hollywood Studios. The first lights were on display in 1995 and continued through a couple moves, changes, and renovations including the addition of Lights! Motors! Action! Extreme Stunt Show resulting in the demolition of the original location of Residential Street. The show moved to Streets of America where it ran every year. Finally, the show ended on January 6th, 2016 to make way for the new Toy Story Land and Star Wars Land.

When the Osborne lights ended, decades of fans were disappointed. While nothing will replace the family legacy of this show, Disney has decided to introduce a new Christmastime Light Show.

Jingle Bell, Jingle BAM! will feature fireworks, snow, and projections of Disney Characters on the Chinese theater on Hollywood Blvd, which will use the advanced technology from Star Wars: A Galactic Spectacular. The likes of Jack Skellington, Wayne and Lanny from ABC’s hit Christmas show Prep and Landing, Bambi, Mickey & Friends, and Beauty and the Beast will grace the front of the theater, which will also be decorated with a seasonal theme.

The story is that the characters have to work together to get Santa back home to the North Pole safely after a long night if delivering presents to children all around the world.

Besides the familiar characters, viewers will also enjoy beloved Christmas songs with a Disney twist and a culminating message from Santa.

The show will run from November 14th through December 31st, 2016. If you’re visiting during this time or are scheduling a visit, make sure Jingle Bell, Jingle BAM! is part of your itinerary!

Are you excited to see the new Christmas show at Hollywood Studios?