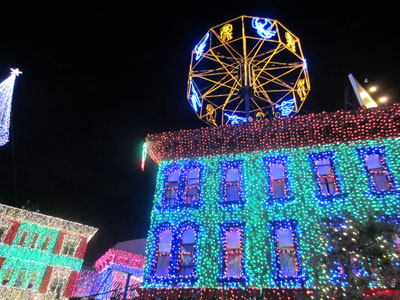 It’s starting to cool off in Central Florida, which means that the humidity is down and the day-time high temperatures are in the mid 70s instead of the high 90s.

It must mean that Christmas is on the way.

You can read the amazing and full story of how Osborne Jennings started his amazing Christmas light display back in 1986. He eventually took a case all the way to the US Supreme Court to establish his right to put on his Christmas display. That is a story for another day.

However, the short version of the story is that Disney has been putting out the amazing light display on the Streets Of America section of Disney’s Hollywood Studios since 1995.

It has become a tradition for many families, and has had a few upgrades along the way.

Back in 1996, Disney added some electronics to the display and choreographed the blinking of the lights to popular Christmas tunes from artists like Barbara Streisand and the hard-driving Trans-Siberian Orchestra.

This year, Disney has again enhanced the light display. This time, they have added artificial snow.

The real frozen stuff wouldn’t last very long in Central Florida and many tourists come to Disney World to escape the brutal winter temperatures that await them back a home.

Disney’s edition of snow isn’t made from freezing ice crystals; it looks more like tiny soap bubbles, and it does look pretty realistic.

Don’t expect a blizzard of fake snow in the Hollywood Studios. Disney’s version is more like a minor flurry, and it was set to a level far less intense than what you see on Main Street USA during Mickey’s Very Merry Christmas Party. There is no accumulation. That is probably a smart move, given the thousands upon thousands of people who turn out to view the lights.

Nonetheless, it is a fun addition to an already fun display.

Let’s take a look at some photos from this amazing light display:

Do you like the Osborne lights at Hollywood Studios?