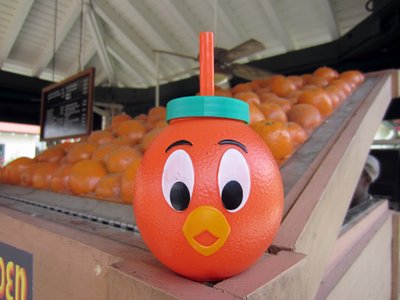 Disney World has been releasing quite a few unique food offerings latterly. Let’s take a look at some of the more recent developments before we get to the latest news about the Orange Bird:

– LeFou’s Brew in the new Fantasyland section of the Magic Kingdom: A frozen apple juice with a foam topping made from passion fruit and mango, available in a souvenir mug or just as the drink itself in a disposable plastic cup.

– The $9 cupcake in a pirate’s chest in Starring Rolls Café in the Mickey Avenue area of Disney’s Hollywood Studios. This was to celebrate the opening of the “The Legend of Captain Jack Sparrow” walk through attraction: The chocolate cupcake is topped with chocolate butter cream and decorated with edible pearls. You also get a doubloon and some interesting-looking “barnacles” as well as a key and map.

– The Doofenslurper appeared in several World Showcase locations at Epcot: You get a frozen slushy in an Erlenmeyer flask with a Phineas and Ferb theme – the image of Dr. Heinz Doofenshmirtz, specifically.

– The Conewhich, which was first available in Carsland at Disneyland, is now also available in Disney Springs: A savory serving of chili or meatballs in a bread cone.

Now, Disney is offering an Orange Bird sipper filled with frozen lemonade. The Orange Bird is a Disney character from the 1970s who initially made a comeback as a decoration in Adventureland in the Magic Kingdom. Now you can buy a drink-filled Orange Bird of your own.  The Orange Bird sipper is available in the Anaheim Produce food stand, which is about mid-way down Sunset Boulevard, between Hollywood Boulevard and the Hollywood Tower Of Terror.

The sipper offering at Disney’s Hollywood costs $8.99, or $9.59 after tax. Considering that basic frozen lemonade in a throw-away plastic cup costs $3.99, you are paying $5 for the plastic Orange Bird sipper.

The lemonade itself was a mix of tart and sweet. It was quite thick and very cold. I had to be careful not to drink too much too fast for fear of getting a brain freeze, which happens to me every time I drink a LeFou’s Brew.

The Orange Bird sipper was made of extremely tough plastic. I tried with all my might to bend the shape with one hand, but the hardened plastic would not budge. The straw is much stronger and thicker than a typically throw-away straw, and will likely hold up to repeated uses.

For anyone who will drink from the sipper just once and then recycle it, this next point won’t be much of a concern. But if you are going to keep the Orange Bird sipper – and for $5 I would – this might be a downer. Of course the frozen lemonade is very cold, and of course Florida is very humid. Put these two things together and you get nearly instant sweat / condensation on the outside of the sipper.

The condensation made the yellow paint that accented the Orange Bird’s beak start to peel away. The black and white paint for the eyes seemed a bit more durable, but it too started to dissipate just a bit. So if you plan to keep and reuse this sipper, realize that the paint will quickly chip away. I hope Disney will address this. But again I suspect the integrity of the orange plastic container itself will hold up well.

I’ll Send You My Orange Bird

I have my single Orange Bird sipper, and I am willing to send it to one lucky reader. Just send an e-mail to me at info@worldofwalt.com. I’ll add you to our mailing list (if you aren’t already on it), and then I’ll select one recipient on or around May 8, 2013. I’ll request your mailing address and then send the sipper to you. Note that the sipper has some paint chips as described above. This give-away is open to everyone, everywhere.

What do you think about this Orange Bird sipper?