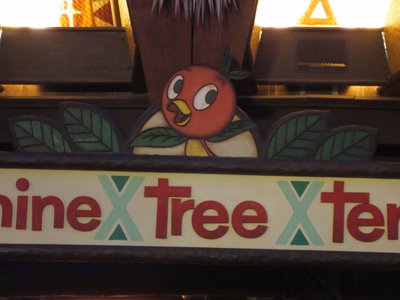 This love of all things old is also true at Walt Disney World.  Disney has decided to bring back the Orange Bird.

Who Is The Orange Bird?

The Orange Bird is just that –a bird who is orange in color and has a head that looks like the fruit for which she is named.  Interestingly, the orange bird does not speak or saying – he doesn’t even sing.  However, he has a unique way of communicating his thoughts.  His ideas appear in puffs of orange-colored smoke above his head.

The Orange Bird was a character unique to Disney World.  You could find him sitting on a tree limb in the Sunshine Tree Terrace.  If you have not seen it, the Terrace is a quick service dining location in the Magic Kingdom’s Adventureland where you can get orange flavored drinks and ice creams.

The Orange Bird was quite popular in the 1970s.  Because he was the official character of the Florida Citrus Commission, he appeared in many advertisements – including print advertisements and television commercials.

During that time, many more people traveled to Disney World via car.  Stopping along the interstate highway at a citrus stand was a popular activity.  Many citrus stands would sell Orange Bird merchandise – from the banks to comic books to playing cards.  There was even a record of Orange Bird music written by Disney Legends Richard Sherman and his brother Robert Sherman.  They wrote six different songs, with catchy titles like “The Little Orange Bird,” “Orange Tree,” and “I’ll Fly The Sky-Way.”

In time the Orange Bird disappeared from Disney World.  But retro is back, and so is the vintage 1970s Orange Bird.

Disney Imagineers actually found the original Orange Bird figure in the Disney archives.  Craftsmen carefully restored in repainted the Orange Bird figure and sent it to Disney World.  He has returned to his original location above the service counter at the Sunshine Tree Terrace.

You can see a full video from D23 here: