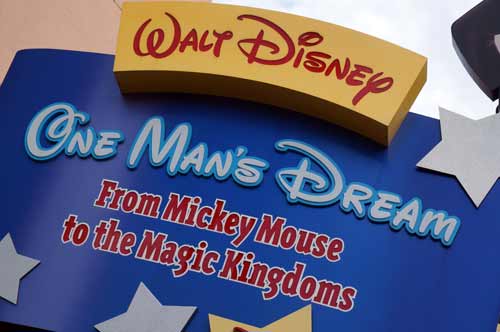 One Man’s Dream to Close at the End of September

Rumor has it that we are about to lose another attraction at Disney’s Hollywood Studios, although it is possible it may just relocate to a different section of the park.

One Man’s Dream, a tribute to the life and work of Walt Disney, opened its doors on October 1, 2001 as part of the 100 Years of Magic celebration for Walt’s 100th birthday. This also happened to coincide with the 30th anniversary of Walt Disney World in Orlando, FL. Since Walt’s career started primarily with film and this continued to be an important part of his life and work, Hollywood Studios (then MGM Studios) was a central figure of the 100 Years of Magic celebration. In addition to the opening of the One Man’s Dream attraction, a 12-story Sorcerer’s Hat was also constructed in the middle of MGM to celebrate Walt’s legacy of creativity and his spirit of adventure. Both installments were meant to be temporary and last only 18 months, but because of the huge success, both stayed for over a decade.

A Walk Through One Man’s Dream

One Man’s Dream started out as the title of a television show hosted by Dick Van Dyke and Michael Landon that aired on December 12th, 1981 just months before Epcot opened. The show told the story of Walt Disney from his birth to his death and the posthumous dream of EPCOT Center opening in Walt Disney World. One Man’s Dream II: The Magic Lives On also celebrated the 5th Anniversary of Tokyo Disney in 2004.

The One Man’s Dream attraction in Disney World’s Hollywood Studios is a truly incredible and one-of-a-kind experience. As you walk through the doors, you are instantly transported into Walt’s life with never-before-seen artifacts and films including interviews with Walt himself. This multi-sensory experience offers things for guests to see, do, and touch. You can even listen to recordings of Walt as he planned his projects throughout the years.

The curving pathway was designed to be accessible to anyone who visited including those in wheelchairs and ECVs; there was no need to transfer to a ride vehicle to appreciate this journey.

Beyond the authentic memorabilia, the attraction itself was well themed. It is not a retrospective look back in time but a journey through the then, the now, and the future. Disney likes to add details all around, and this attraction is no exception. The floors change depending on the decade; a wood floor for Marceline, Missouri, and linoleum for the 1950s. Look up, and you’ll see a banner that weaves throughout the halls. It makes note of world events that were happening simultaneously with what was happening in Walt’s life.

The attraction ends with a 15-minute film produced by Roger Holzberg. When researching for the film, Holzberg found that many young guests didn’t know that Walt was a real person. His goal was to show not only that Walt was indeed very real, but that he was just like us. Walt believed that anyone could achieve their dreams with hardwork and dedication. Holzberg hoped to show the scope of Walt’s accomplishments and how he inspired those around him to also be successful and follow their dreams. I think he hit the mark. This is an excellent film.

When One Man’s Dream opened, artifacts from all over the country were transferred via Federal Express on an Airbus A300 to Walt Disney World for the special installation. These items arrived on June 29th, 2001.

Included in the transfer was Walt’s working office, which was moved from Disneyland to Disney World so that guests who might never make it to California could appreciate a glimpse into Walt’s real life. Many people were disappointed about this move since his working office, where he actually worked, sat next to his formal office, where he entertained reporters and broadcasted live shows to the American people, in Anaheim for over 25 years. Although the office was promised to return to Anaheim in 2003, it stayed for the duration of the attraction, and it has now been packed up. Many people speculate that it is headed to the Disney Family Museum in San Francisco, CA.

Four-hundred other items were also transferred. Because One Man’s Dream was meant to be an 18 month installation, many of the items there now are replicas of the originals, which have been returned to their owners. Walt’s school desk from Marceline, MO was much too big for the showcase. Although it stayed for a little while, the original was returned and a smaller-scale replica was put in its place. The Multiplane Cameras on display are also smaller replicas. As big as they look in One Man’s Dream, the real thing was actually much larger.

However, there are some items that are authentic. When the attraction opened, Julie Andrew’s dress from Mary Poppins was prominently displayed, but it started to become discolored and deteriorate in the hot lights of the display case so it was removed and replaced with Fred McMurry’s suit from Bon Voyage (1962). On Walt’s animation desk is a Mousecar (Mickey Mouse and Oscar) award. This award was created by Walt himself and given to distinguished employees at the studio. There is no record of how many of these awards were given out. The Bird in the Gilded Cage, Walt’s inspiration for creating audio-animatronics is also on display in One Man’s Dream.

The End of an Era

Sadly, Disney’s Hollywood Studios has seen many attractions close over the last several months. Although it was rumored that One Man’s Dream was on the list, true Disney fans hoped it would never happen. Although it will reportedly close its doors at the end of September 2015, we can find solace in knowing that the Disney Company cared enough to create such an attraction in the first place and allowed it to run for so long.

Fortunately, these closures will see new attractions coming to the Studios, and the park might even get a new name. Exciting things are happening, and Walt even said it himself: “In this volatile business of ours, we can ill afford to rest on our laurels, even to pause in retrospect. Times and conditions change so rapidly that we must keep our aim constantly focused on the future.”

Will you miss One Man’s Dream when it is gone?
Leave your comments below.