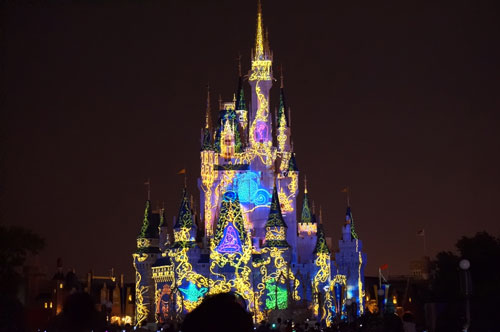 Once Upon a Time Castle Show

Disney has really been perfecting their projection mapping technology lately. With Disney’s Animal Kingdom being open at night, the Tree of Life Awakenings brought some night time fun to the park, and Disney’s Hollywood Studios wowed audiences with Star Wars: A Galactic Spectacular and, more recently, Jingle Bell, Jingle Bam! on the Chinese Theater.

Magic Kingdom has been using projection mapping for some time to turn Cinderella Castle into a giant screen, but the new Once Upon a Time castle show that debuted on November 4th, 2016 seems to really bring out the best that this technology has to offer.

Once Upon a Time

The show begins with Mrs. Potts from Beauty and the Beast, telling Chip, her son, some bedtime stories. As a young boy’s Imagination is prone to wander, the show follows. The audience is taken on a journey through scenes from Cinderella, Peter Pan, Alice in Wonderland, The Many Adventures of Winnie the Pooh, and more.

Once Upon a Time, inspired by a show of the similar name at Tokyo Disneyland, seems to fill every spot of the castle with amazing projection. You’ll witness Peter Pan flying over London to Neverland, a duel between The Beast and Gaston, and borderline psychedelic scenes from Alice in Wonderland and Winnie the Pooh.

All of the scenes are pretty amazing, and the finale brings even more of your favorite characters like Pinocchio, Tinker Bell, Ariel, Aladdin, Genie, Jasmine, Cinderella with her Prince and the Fairy Godmother who conjures up her own sequence of special effects.

Notably, there are no Pixar characters nor does Mickey appear. Regardless, this is an amazing bedtime story! It really sets the bar high.

If you want to see the show, check out your MyDisneyExperience app. The times change every night from as early as 6:45 PM, before Wishes, to 10:45 PM, after Wishes.

Do you enjoy the Castle projection shows?