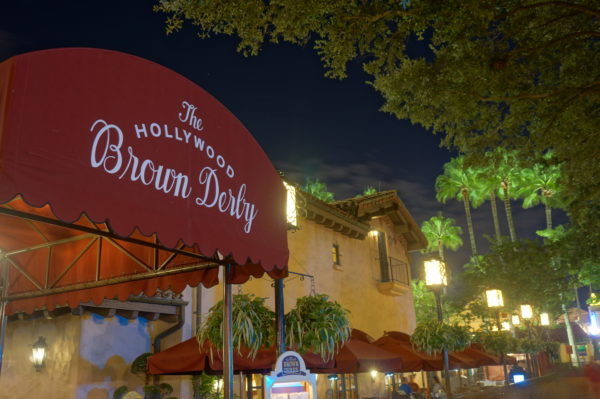 The Hollywood Brown Derby at night

In a bygone era called the golden age of Hollywood, the place to see and be seen was the Brown Derby Restaurant.  The Brown Derby was actually a chain with the first one opening in February of 1926 at 3427 Wilshire Boulevard by Wilson Mizner.  Yes, it actually was in the shape of a derby.

The restaurant even made a cameo in the 1947 movie Fun and Fancy-Free “Mickey and the Beanstalk.”

Still, the more well-known Brown Derby would be the Hollywood Brown Derby which opened in 1929 at 1628 North Vine Street.   Many of Hollywood’s glamorous whose who’s dined here.  Glamorous actors and actresses such as Clarke Gable, Marlene Dietrich, Carole Lombard, Spencer Tracy, Alfred Hitchcock, etc.   It even “appeared” in an episode of I Love Lucy. As well as Eve Arden and William Holden.  Besides its famous clientele, it was also known for its walls of hand-drawn caricatures of those glamorous patrons.

Some delicious recipes such as Cobb Salad and Grapefruit Cake were items on the menu.  Actress Shirley Temple claims the nonalcoholic drink bearing her name originated there in the 1930s.

Unfortunately, the Brown Derby has since closed but it lives on at Walt Disney World. Right in the middle of Hollywood Studios, a replica lives here complete with derby (all be it a small one) and its famous walls of caricatures!

In this upscale sit-down restaurant with a menu consisting of Lobster Bisque, Shrimp Cocktail, Filet Mignon Steak Diane, and the Brow Derby Signature Burger you escape from the hustle and bustle of the park.  You can sit down and enjoy a leisurely scrumptious meal in an ambiance that will make you forget where you are.  No time for a meal sit down at the bar and treat yourself to a cocktail.

Here at the Brown Derby you can step back in time and pay a visit to the era of glitz, glamor, stars, and starlets!  Go to be seen and stay for the delicious food. With the famous Cobb Salad and Grapefruit Cake on the menu, you can also eat like the stars of the past.

Have you eaten at the Brown Derby in Hollywood Studios?