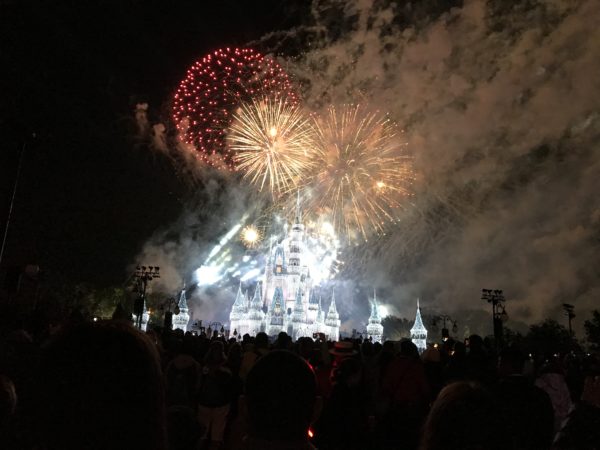 Fantasy in the Sky Fireworks for New Years Eve 2017

New Year’s Eve 2019: Where to Party in Disney World

Disney sure knows how to thow a party, and one of the partying-est nights of the year is New Year’s Eve. From elegant to down-right fun, Disney has a party for everyone! Let’s take a look at every New Year’s Eve Party in Disney World this year!

Feliz Ano Nuevo at Disney’s Coronado Springs’ new Gran Destino Tower is one of the newest New Year’s Eve parties. This party will take place at the new rooftop restaurant, Toledo – Tapas, Steak, & Seafood and will feature a menu with traditional Spanish New Year’s foods. Entertainment includes an electric flamenco guitarist during the meal and a DJ in the Dalhia Lounge. At midnight, you can watch the fireworks at nearby Epcot and Disney’s Hollywood Studios from the floor to ceiling windows in Toledo or the balcony of the Dahlia Lounge.

Mezzanotte (Midnight) at Topolino’s will have an Italian Masquerade theme. All guests are encouraged to wear red as it is an Italian tradition, and the dress code calls for dress pants or slacks with a collared shirt for men and dresses, skirts, pants, or blouses for women; plus, you’ll get to wear colorful custom masks.

Topolino’s is a restaurant at Disney’s Riviera Resort, which will open in mid-December. Topolino is the Italian name for Mickey! This Disney Vacation Club Resort will allow DVC members to book before regular guests. The cost for this event has a bit of shock value at $550 per person, but it includes tax and gratuity and all of your food, drinks (alcoholic and non-alcoholic), and entertainment for the evening. The menu is said to include a buffet of artisanal cheese, imported French and Italian charcuterie, house-made bread, chilled seafood, hand-crafted pasta, European desserts, and French and Italian specialties plus a champagne toast at midnight. Entertainment will include traditional musicians and vocalists from the Italian Riviera during dinner and a DJ later on. You’re also paying for a small crowd limited to just 200 people. You’ll have a great view of the Epcot and Disney’s Hollywood Studios fireworks at midnight!

Countdown to Midnight at Disney’s Contemporary Resort’s Fantasia Ballroom is one of the coolest New Year’s Eve experiences because it is just across the street from Magic Kingdom. The party features interactive chef stations as chefs prepare dishes inspired by Signature Disney World restaurants. Besides the opportunity to try some of Disney’s most amazing food, there will also be live music, dancing, a live band, a midnight toast, and unique photo opportunities. You’ll even get ground-level viewing of the New Year’s Eve fireworks at Magic Kingdom.

The Ink & Paint Club is a pre-party add-on for Countdown to Midnight. It is only available with the purchase of a Countdown to Midnight ticket. The party is inspired by the Walt Disney Animation Studios Ink & Paint Department and offers guests a private party area throughout the evening plus private viewing for the fireworks, a dessert and champagne toast, and photos with some of your favorite Disney characters.

The Pixar Party also takes place at Disney’s Contemporary Resort. Disney will transform two ballrooms into a Pixar wonderland of your childhood dreams. There will be Pixar characters, dancing, an interactive DJ, and fun activities like Boot Camp with Sarge.

Disney’s Boardwalk Countdown to 2020 will be held at the famed Atlantic Dance Hall near Disney’s Boardwalk Inn. This lively event will feature a life DJ, party hats and horns, and even a confetti drop and a complimentary champagne toast at midnight. Throughout the night, you’ll enjoy sweet and savory treats and a bit of Disney magic. At midnight, you’ll enjoy the amazing Epcot fireworks.

New Year’s Eve at Flying Fish at Disney’s Yacht Club Resort will be an elegant event with seatings at 5 PM and 8:30 PM. Both times will offer a multi-course prix fixe menu from award-winning chef Tim Majoras. The second seating will even include a sustainable seafood tower and intermezzo.

A New Year’s Eve Celebration Disney’s Grand Floridian Resort puts you waterside at Narcoossee’s. There isn’t an official party going on, but you can book your Advanced Dining Reservations and enjoy relaxed dining earlier in the evening or more upbeat dining later in the even when a three-piece band shows up complete with a dance floor!

Arguably the fanciest dining in all of Disney World, Victoria & Albert’s will also host a New Year’s Eve Celebration with a live harpist. Diners will enjoy a champagne reception before dinner and wine pairing during dinner. Victoria & Alberts is a AAA Five Diamond and Forbes Travel Guide Five Star Restaurant, and there is a strict dress code. If you want to celebrate New Year’s Eve in grand style (and money isn’t a concern), this is definitely the celebration for you!

Ever spend New Year’s Eve in Disney World?  Want to?