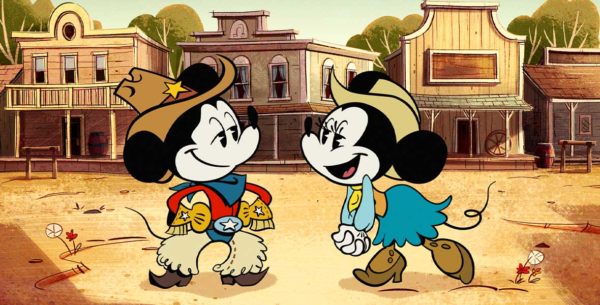 In this edition of Now Streaming On Disney+: The Mandalorian wraps up its second season, we get to see the sunrise at Walt Disney World, Mickey Mouse and his friends are back, plus we’ll go across the pond to the United Kingdom.

The Mandalorian (Season 2, Episode 8): Episode 8 will wrap up the second season of Disney’s mega-hit from the world of Star Wars.

The Wonderful World of Mickey Mouse (Episodes 9 and 10): Join Mickey and his friends in episodes 9 and 10 of the main mouse’s new show. Episode 9, titled “Supermarket Scramble”, will center around the gang preparing for a barbecue, when a routine trip turns into a full journey. Episode 10, titled “Just the Four of Us”, will focus on Donald and Daisy who attend a double date with Mickey and Minnie. An issue arrises when Donald and Daisy allow a little lie to become a problem.

On Pointe (Documentary Series, 2020): Disney describes On Point as: “Discovering their potential won’t be easy. Get a glimpse into the students from the School of American Ballet in #OnPointe, an Original Documentary Series“.

Into the Woods (2014): Disney describes Into the Woods as: “Into the Woods” is a modern twist on the beloved Brothers Grimm fairy tales, intertwining the plots of a few choice stories and exploring the consequences of the characters’ wishes and quests. This humorous and heartfelt musical follows the classic tales of Cinderella, Little Red Riding Hood, Jack and the Beanstalk, and Rapunzel—all tied together by an original story involving a baker and his wife, their wish to begin a family and their interaction with the witch who has put a curse on them”.

Dory’s Reef Cam (2020): Jump back into “the big blue world” with Nemo and Dory. This premiere feature on Disney+ is described the studios as: “Dive into the waters below and watch the aquatic wildlife from the world of Nemo and Dory”.

Disney Parks Sunrise Series 1 (2020): Although information about this new series coming to Disney+ is pretty limited, we believe it’s safe to assume it follows along the lines of a video Disney Parks previously posted.

Eddie the Eagle (2016): 20th Century Studios describes Eddie the Eagle a: “Inspired by true events, Eddie the Eagle is a feel-good story about Michael “Eddie” Edwards (Taron Egerton), an unlikely but courageous British ski-jumper who never stopped believing in himself – even as an entire nation was counting him out. With the help of a rebellious and charismatic coach (played by Hugh Jackman), Eddie takes on the establishment and wins the hearts of sports fans around the world by making an improbable and historic showing at the 1988 Calgary Winter Olympics. From producers of Kingsman: The Secret Service, Eddie the Eagle stars Taron Egerton as Eddie, the loveable underdog with a never say die attitude“.

Mulan (2020): Last week, Disney+ released the live-action Mulan across all of their domestic platforms. Previously, Mulan required a premium membership forcing Disney+ customers to pay an additional fee to view the film (other films to follow this same method). We chose Mulan as our must see Disney+ film from last week.

If you’re looking for the Mulan you knew in the 90’s, this film may catch you off guard. Gone are the songs that fans have grown to love. Storylines have been removed, added, or changed, and the overall flow of the film is much more Hollywood than the previous feature. With all that being said, I thoroughly enjoyed this version of Mulan.

I’ll admit I was waiting for the actors to break out in song or for a funny one-liner from Mushu (who does not appear in this version). Neither one of those things came to be, but I was met with several great action scenes that you simply could not achieve in an animated film. The struggle of Mulan to gain acceptance and prove herself to others is consistent with both the original Mulan and the live-action take. The use of live actors allowed a different type of connection to be established between the characters and viewers. By the film’s end, I was glad that they allowed the 1990’s Mulan to exist in her own world in Disney history while giving this new Mulan a chance to tell her story.

Disney can learn a lot from Mulan for their future live-action remakes. There may not be a need to include all songs and jokes from the original films, and in fact, trying to imitate a film exactly may actually hurt the storytelling and become a distraction.