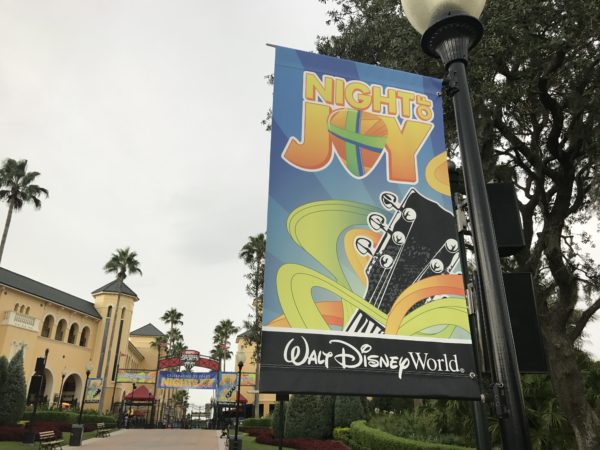 This was the 35th year for Disney’s Night of Joy, a music festival that features contemporary Christian artists.  The event normally bring in huge crowds.  In 2017, however, Hurricane Irma changed the game.

Crowds were low, but spirits were high.  Let’s take a look at how things went on Friday.

If you haven’t been there, the Wide World of Sports complex sports world-class athletic fields and facilities.  It feels a bit removed from the rest of Walt Disney World, but it is a very nice place to visit.

The artists who perform on the main stages are all seasoned and talented professionals.  Even with very low crowd levels, as people stayed away due to the impending hurricane, everyone seemed engaged and enjoyed the event.

For those who wanted a break from the concerts, Disney offered a FanFest with free-play arcade games (perhaps refugee machines from the now-closed Disney Quest?), interactive games, and a chance to meet Mickey, Minnie, Donald, and Goofy – all decked out in their sports attire.

If you are a fan of contemporary Christian music, the Night of Joy is a premier event and one to check out.

While crowd levels were low this year, I really enjoyed the event.  The artists were amazing, even with so many empty seats.  The FanFast was surprising a lot of fun.

Overall, it felt like one of those dreams where you have the Magic Kingdom all to yourself and you can see and do whatever you want with no crowds.  It was just like that – except with Christian music.

Have you been to Disney’s Night of Joy?