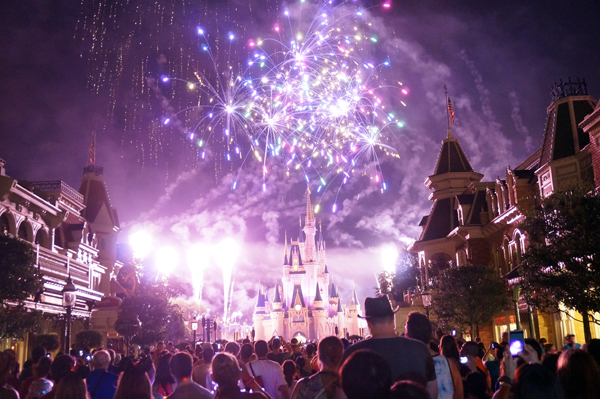 Walt Disney World has some amazing holiday celebrations, but people often overlook New Years Eve in favor of more notable holidays like Halloween, Thanksgiving and Christmas. This is unfortunate because Disney really knows how to celebrate the New Year! It’s a safe, family-friendly atmosphere where everyone can have fun.

If you plan on visiting Disney World for the New Year, there are a few things you should know.

– Arrive early and plan to spend the day since the parks will likely reach capacity early in the day. New Years Eve is often the busiest day of the year, so the crowds will be intense.  Be prepared.

– Because of this, park hopping is not recommended.

– Advanced Dining Reservations do not guarantee admission if the park has reach capacity.

– Rent a locker as soon as you arrive and pack it with sweatshirts and rain gear. These will probably fill up, and the weather is likely to change as the day turns to night.

– If you have some must-do attractions on your list, regardless of the park, be sure to add a FastPass+ to your plans since wait times can reach up to two hours or more.

Let’s take a look at what the parks and resorts offer!

A Totally Tomorrowland Christmas will take place at the Tomorrowland Stage at various times between 3:40pm to 9:10pm. You’ll see some of your favorite characters including Stitch, Buzz Lightyear, and Mike Wazowski along with holiday dancers as Stitch tries to bring Santa Claus to the show.

Mickey’s Most Merriest Celebration, the castle stage show, will be performed at 6:50pm and 9:10pm on both December 30th and December 31st. In between performances, Holiday Wishes New Years Celebration occurs at 7:30pm with expanded fireworks.

Fantasy in the Sky, the official New Years Eve fireworks show will take place at 11:50pm over Cinderella Castle. It is amazing!  If you’d like to see these fireworks but you aren’t in the Orlando area, Disney will broadcast them from the Disney Parks Blog.

Epcot is good for families as well, but it’s definitely more dramatic than Magic Kingdom. Pick up a Times Guide as you’re walking in or check your MyDisneyExperience app for updated times; here is what you can expect at Epcot on New Years Eve.

There will be live entertainment throughout the day including a DJ and light show at Future World Fountain, a silent DJ in Japan, flame effects and a smoke blowing dragon in China, a British Invasion band in the United Kingdom, and a Euro-pop DJ with lasers in Italy. In the American Adventure Pavilion, there will be a Latin band and other entertainment from 2pm to 1am. Cast Members will also be handing out party gear at various locations starting at 4pm while supplies last.

IllumiNations: Reflections of Earth will show with a Holiday Finale at 6pm then again with a New Years Eve Countdown and a Fireworks Salute at 11:40pm supported by live DJs.

If you’re looking for fun dining, World ShowPlace is hosting an all-you-care-to-enjoy family buffet with vignettes for taking photos and Disney music in the background. You can find seating for this event between 3pm and 9pm, and it costs $73 per adult and $45 for ages 3 to 9. Monsieur Paul in France will also have a special four-course meal with six seatings at 11:45am, noon, 2:15pm, 2:45pm, 5:45pm and 6:15pm. The cost is $110 per person. Late night seatings at 8:45pm and 9:45pm will feature an enhanced menu and will cost $305 per person.

Disney’s Hollywood Studios is notably less spectacular than the other parks, but if you want to celebrate in a less crowded atmosphere, this is the place to be. There’s a DJ Dance Party at Center Stage starting at 7pm and a countdown to midnight with fireworks. Jingle Bell, Jingle BAM! can be seen at 9pm and Star Wars: A Galactic Spectacular will play just after midnight.

A couple of the Disney Resort Hotels will get in on the celebration as well.

Disney’s Contemporary Resort Hotel will host a party starting at 8pm. Guests will enter the Fantasia Ballroom for drinks and dancing with an interactive DJ playing music from the 60s to today, then Alter Ego will perform live. There will also be food served from California Grill, Flying Fish, Citricos, and Narcoossee’s. At midnight, guests can go outside and enjoy Fantasy in the Sky fireworks at Magic Kingdom.

Disney’s Grand Floridian Resort and Spa has two restaurants participating in the New Years Eve Festivities. Victoria and Albert’s, the fanciest hotel on property, will serve a butler-style meal with a live harpist playing in the background. You’ll even receive a personalized keepsake menu that you can keep as a souvenir. Seatings are at 6pm and 7:45pm and the meal will cost you a whopping $600 per person. Narcoosee’s will be a bit more affordable at $150 per adult and $70 per child for a four-course meal. Late night diners can enjoy a five-course meal at 8:30pm and 9:25pm. The cost for this meal is $255 and $95 for adults and children, respectively.

Disney Springs will present the Starbright Holidays drone show at 7pm and 8:30pm, and food and beverage carts will be placed throughout the complex serving cocktails, beer, and small bites.

For some unique entertainment, check out Cirque Du Soleil. There will be two performances at 6pm and 9pm, and tickets range from $90 to $150 per person.

Have you been in Disney World on New Years Eve?