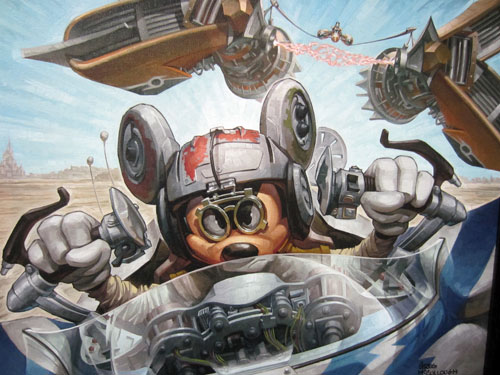 Disney CEO Bob Iger announced on August 15, 2015, at the D23 Expo that Disney’s Hollywood Studios would receive a completely new themed land having to do with Star Wars. Though we don’t know exactly what the land will be called yet, we have gotten a peek at what the new land could offer.

It will be several years before Star Wars Land and Toy Story Land are completed as part of the construction and rebranding process happening at Disney’s Hollywood Studios. Imagineers have noted that they’re taking their time with this project and they consider it quite an honor to work with the Star Wars saga. People seem to have an emotional connection to Star Wars whether they grew up with the original movies or the remastered ones or they have recently gotten their kids involved in the greatest trilogy on earth.

Star Wars land is a big undertaking, and Disney wants to make it perfect.

Disney has opened up several Star Wars attractions to keep us coming back for more even when there is less and less to do in the park. Let’s take a look at what you can expect to see on your next trip to Hollywood Studios!

Out with the old

If you really liked Hollywood Studios the way it was, you won’t be completely disappointed. Disney plans to keep much of what you loved that was already there including Star Tours and Jedi Training: Trials of the Temple. Both the Star Tours ride and the Jedi Training Academy have added elements from the new movie, The Force Awakens, so you’ll get a new experience in the same format that you love.

In with the new

Star Wars Launch Bay opened on December 4, 2015, as part of The Season of the Force events. Inside, you’ll find scaled replicas of movie props and models plus authentic costumes and concept art from the movies.

You can meet some of your favorite characters like Chewbacca and Kylo Ren and watch exclusive footage of interviews with writers, directors, and producers of the films. There is also a game center linked up to Disney Infinity 3.0 and a place to buy souvenirs.

Outside of the Launch Bay, you’ll find the beloved Jawas who would love to trade items with you. You’re very likely to encounter a Stormtrooper or two as well. They’ve been known to arrest the occasional guest as occasionally!

Every hour starting at 12:30 PM and going to 6:30 PM, you can catch Captain Phasma leading her troops through the Studios and ordering them around using unique dialogue in the voice of Gwendoline Christie, who plays Captain Phasma in the movies.

After the procession, you’ll get to see Kylo Ren, Chewbacca, Darth Vader, BB-8, Darth Maul, and others perform selections from the movies live on stage. This exciting daytime show is sure to make any Star Wars fan smile!

Perhaps the most exciting new addition to Hollywood Studios is the Galactic Spectacular , an evening fireworks show. The show incorporates the iconic music with projection-mapping technology, and the Chinese Theater, used at the backdrop, disappears into the night as Han Solo, Darth Vader, and your other favorite Star Wars characters bring the movie to the center of the park. Since the show happens outside of the amphitheater that confines Fantasmic, it can reach more people at once. The detailed imagery immerses the audience in the story as lasers, lighting, pyrotechnics, and fireworks not only tell the story but allow you feel the conflict unfold in front of you.

The show debuted on June 17, 2016, and it’s the largest fireworks show in the history of Disney fireworks shows according to one Disney Imagineer. One reason it’s going to be so popular is that it incorporates all seven of the movies reaching every generation of Star Wars fans.

Are you excited about the Star Wars options in Hollywood Studios?