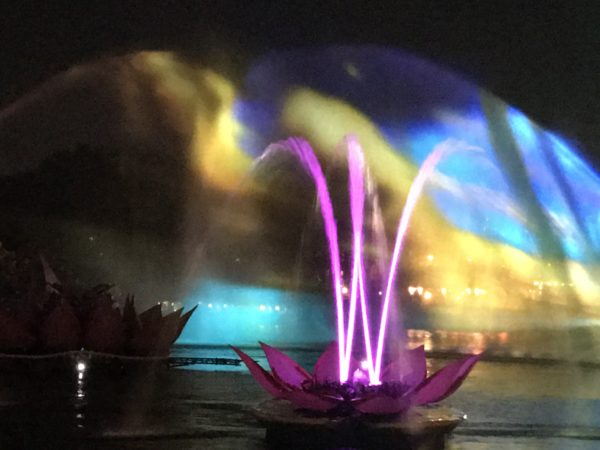 Rivers of Light opened in Disney’s Animal Kingdom in February 2017, nearly a year after Disney said it would first open in April 2016. The show’s amphitheater also has the smallest capacity by far of any of Disney World’s nighttime shows.

The show, which includes a beautiful display of water fountains, mist screens, fire, lasers, , and projection mapping has now been running for a year now and has delighted guests every night. Rivers of Light has a beautiful symbolism representing the beauty of all things together on earth.

Now there’s a new offering during this show: a dessert party!

Let’s take a look at the new Rivers of Light Dessert Party!

The Rivers of Light Dessert Party, similar to the show itself, is a more intimate setting than other similar parties in Disney World making it feel more VIP.

Aside from the size, it is similar to other dessert parties in that it offers a variety of desserts and some savory snacks along with a premium view of the show. This party also offers alcoholic beverages.

Being that this is a dessert party, much of the food is sweet. It also has a really cool theme!

There are also some healthier options including Havarti and Gouda cheeses, a nut assortment, and a variety of fruit.

If you just cannot be satisfied at a dessert party with a Mickey Premium Ice Cream Bar, you can make a special request and the Cast Member will likely oblige. Also, if you have any dietary restrictions, Cast Members will provide you with special snacks to fit your needs!

This dessert party offers some liquid desserts too!

Adults can choose a basic Bud Light, Tiger Beer, which is not easily found outside of Disney World and is $10 a glass in the park, Cabernet, or Chardonnay. The Asia Chai Tea is Absolut Citron, Sours, and Chai Tea Monin. It’s very good, and it doesn’t have a strong taste of alcohol. The Tiger Lily is also a delicious option with Bacardi Rum, Orange, Pineapple, Lime, and Strawberry Monin. It’s very sweet and also not very strong.

Kids and adults who aren’t interested in alcohol can choose from ice water, iced tea, and specialty beverages including Purple Lotus and Disney’s famous Jungle Juice!

Attending the Rivers of Light Dessert Party gives you exclusive access to the Asia Viewing Area Terrace, which is across from Expedition Everest. You can enter here 90 minutes before Rivers of Light begins and peruse the dessert and drink tables until then.

Once the show begins, the Cast Members will ask you to stay situated at your table since the lights go down for the show. However, you are free to load up on desserts and drinks before this time, and you’ll have plenty of notice to do so, and eat and drink during the show with great views from your table especially if you can snag a table high up on the terrace.

You can also move to a seating area reserved for dessert party guests. The first seven rows of the theater are designated for you. Once all the party guests are seated, the rest of the seating is then filled with VIP tour guests and FastPass+ reservations.

The Rivers of Light Dessert Party is offered on select evenings and Advanced Dining Reservations are required. The party costs $79 for adults and $47 for kids ages three to nine. Taxes are included, but gratuity is not, nor is it required. Guests attending the party also must have valid park admission.