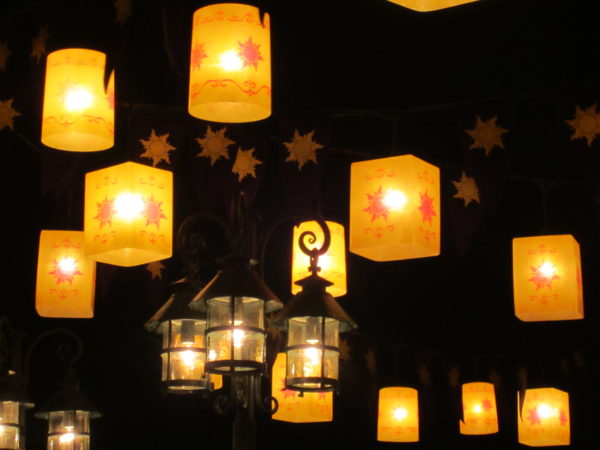 Lots of lanterns in the Tangled Rest Area at night

The PhotoPass program at Disney World is one of the magical extras that you get for free with your park admission. You don’t even have to be guest of one of the Disney resort hotels to get it!

You simply look for a PhotoPass photographer, let him or her take some fun pictures of you and your travelling companions, and show them your MagicBand or ticket card. They’ll scan your band or card and apply the photos right to your MyDisneyExperience account. You can then log in to your account and see all of your photos right there.

If you’ve purchased the MemoryMaker, you get all of your photos with your purchase; if you haven’t, you can purchase photos individually or buy the digital rights and print as many copies as you want at your local photo printer.

There are dozens of PhotoPass locations all around Walt Disney World parks, but Disney has added some new ones this summer.

If you’re visiting Disney World in the next few months, be sure to stop at these locations and get your pictures taken!

Near Rapunzel’s Tower in Magic Kingdom‘s Fantasyland, you’ll find a PhotoPass photographer with a lantern prop. She’ll be happy to take some photos of you and yours with this beautiful lantern, and it will add some nice light to your photo. Stop anytime after dusk!

The lotus blossom has long been a symbol of Epcot, and now it can be part of your photo! Stop by the China pavilion in Epcot’s World Showcase anytime after dark, and ask the photographer to use the lotus blossom prop.

The lotus flower can grow in murky water, and it blooms to be a beautiful flower with unbelievable color even in pretty ugly water. What a great representation of how Epcot brings people from all over the world together!

Disney Springs is the new shopping district that was expanded and renamed from Downtown Disney in the past few years. There’s so much to see and do – and eat – but one of the newest things is the Disney PhotoPass virtual backgrounds. There are dozens of possibilities that will place you right inside some of Disney’s most iconic stories like Beauty and the Beast, Moana, Toy Story, and Star Wars. There are even some attraction backgrounds like Pirates Of The Caribbean and Peter Pan’s Flight.

3. Pandora – The World of Avatar

Disney’s Animal Kingdom just opened their largest expansion ever as well, and it’s called Pandora – The World of Avatar. It’s a magical place full of color and life, and there are tons of photo ops. During the day, take advantage of the lush, tropical plants that play great backdrops for photos. At night, the bioluminescent plants come to life. Your friends and family won’t believe that you took those photos in Disney World! It looks like you visited a remote tropical island!

2. Beauty and the Beast – Live on Stage

Beauty and the Beast – Live on Stage performs daily in Disney’s Hollywood Studios. If you’d like to get even closer to the characters, ask the PhotoPass Photographer to add Beauty and the Beast to your photo, and she’ll do just that. She’ll pose you in such a way that the photo can be made into a Magic Shot, and Disney photographers will add Chip so it looks like he’s sitting right in your hand!

This option is also available at Epcot in the France pavilion.

1. Pirates of the Caribbean

If it’s a pirate’s life for you, you won’t want to miss out on the opportunity to get a photo while riding your favorite attraction – Pirates of the Caribbean in Magic Kingdom’s Adventureland.

Everytime you ride the attraction, you can now get a photo automatically added to your MyDisneyExperience account. As long as you’re wearing your MagicBand when you ride, the RFID technology will sense your visit, snap the picture, and automatically add it.

If you got the MemoryMaker, attraction photos are included in your purchase.

Do you get Disney PhotoPass pictures taken?