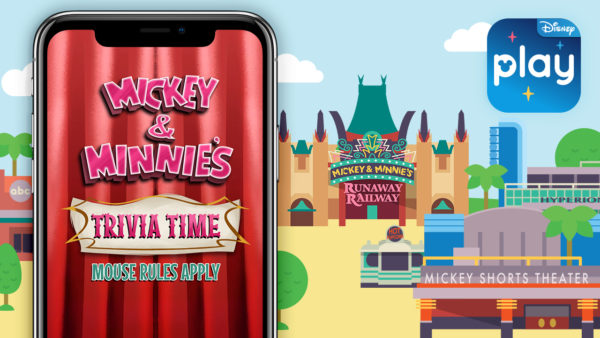 These days it seems everything is at our fingertips.  Why not some more fun from your Disney Parks App?

We are so excited about the opening of Mickey & Minnie’s Runaway Railway.  With the opening of the Railway comes a trivia game inside the Disney Parks App that is designed to raise that excitement level!

Beginning next month, guests can use their Disney Parks App to be transported to the world of Disney animation.  They can put their Disney character and cartoon trivia knowledge will be put to the test!

This isn’t just any old trivia game.  There will be five trivia packs that will be filled with hundreds of trivia questions.  Some of these packs can only be opened after riding the Runaway Railway and experiencing “Vacation Fun,” the new cartoon short at Mickey Shorts Theater.

Of course, Disney doesn’t stop there. There will be digital “achievements” that guests can earn in the app like the “Runner-Away” for Mickey & Minnie’s Runaway Railway and a “Short Stuff” achievement for the Mickey Shorts Theater.

Will you try Mickey & Minnie’s Trivia Time on the Disney Parks App?