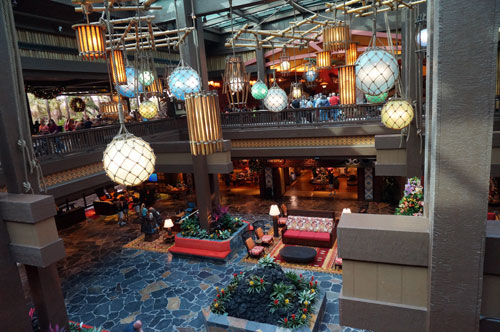 Recently, Dole Whips relocated to the Pineapple Lanai, and Captain Cook’s quick service restaurant re-opened after an extensive refurbishment.  It looks better than ever.

We have now reached another major milestone: many interior construction walls have come down and the new, open lobby is open for business. The project to remodel the lobby, which started in March, 2014, is now mostly complete although it seems a few finishing touches may still be on the way.

Gone is the much beloved but space-hogging water fountain and in its place we have plenty of modern south-seas-inspired seating as well as plants and open spaces.

The overall work on the Polynesian isn’t done yet. You can continue to see progress on the over-water bungalows that will be part of the Disney Vacation Club, and Trader Sam’s Enchanted Tiki Bar is expected to open in February, 2015.

Do you like the new look of the lobby in Disney’s Polynesian Village Resort?