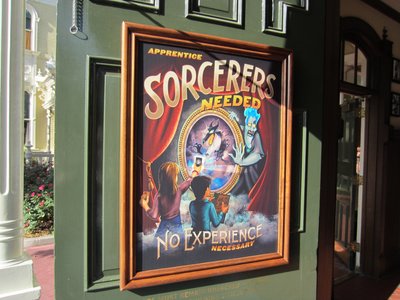 With over half the country’s population considered video gamers, and many more playing games online or through mobile phone applications, games are a natural area for Disney exploration.

It Started With Kim Possible

One of Disney’s first ventures into interactive games has been at Epcot theme park for several years. The Kim Possible World Showcase Adventure was a kid-focused experience that allowed gamers to join a spy adventure to help thwart the plan of an evil arch villain.

The newest interactive game at Walt Disney World is now in place at the most popular park of them all – Magic Kingdom. Building on the success of the World Showcase adventures, this new interactive attraction uses “magic” cards and over 90 minutes of original animation to create a live-action role-playing game.

This new adventure is called Sorcerers of the Magic Kingdom, and it involves a nefarious plot by Disney’s animated villains to take over Magic Kingdom. The game is hosted by Merlin the legendary magician, and all the tools necessary to participate in the game are included in the price of admission.

Visitors may begin the game at two different entry points, and proceed to kiosks located throughout the park. Animation at these kiosks provides clues to the whereabouts of Disney villains from all of Disney’s best loved animated classics. Players can then use their cards to cast spells and figure out the right key to defeat each of the villains. Epic battles involving fireballs and fierce storms rage until each of the evil characters has been defeated.

At the often-crowded Magic Kingdom, where lines for rides can stretch around the proverbial block, Sorcerer’s of the Magic Kingdom is a refreshingly queue-free adventure. While the experience has been designed to be accessible to children, adults who enjoy video games and other games such as Magic: The Gathering may find themselves enjoying this adventure.

As new attractions are added to the Walt Disney World landscape, and old attractions are updated, the interactive possibilities at the theme parks and beyond will continue to increase. Epcot’s popular Test Track ride is currently in renovations, and the new-look attraction will allow guests to design a vehicle in addition to the thrilling test ride. The New Fantasyland expansion at Magic Kingdom will include an area where young visitors can train to be one of Cinderella’s Royal Knights. Plans are in the early stages for an Avatar-themed expansion to Disney’s Animal Kingdom, which is sure to include many opportunities for visitors to dive into the action of that epic 3-D film.