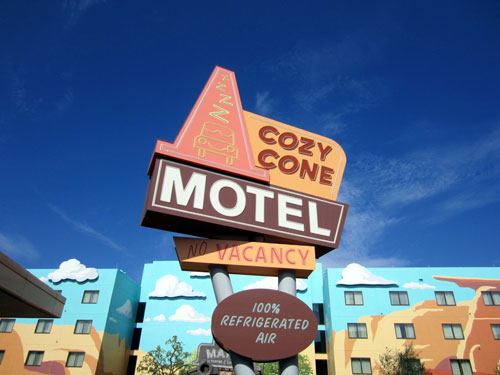 Is it time for a new resort hotel at Disney World?  Yes!

Disney hasn’t prepared for a new hotel since 2003. The area that is now Disney’s Art of Animation Resort was supposed to be a phase two of Disney’s Pop Century Resort. However, tourism dropped after the terror attacks of September 11th caused travel fears.

Disney decided to re-theme the area as Art of Animation and restarted construction in 2010. When the resort was completed in 2012, it added 984 standard rooms and 1,120 Family Suites, housed in ten buildings with three themed pools and four themed areas. While this hotel is a value resort, it has one of the highest rated food courts on property in Landscape of Flavors. It also has one of the best pools on property; The Big Blue Pool is the first on Disney property with underwater speakers. It’s also the largest pool on property.

This was the last of 20 resorts built under Michael Eisner’s leadership. Eisner also led the construction of multiple theme parks including Disney-MGM Studios, now Disney’s Hollywood Studios. It’s obvious that Eisner’s strength was in the theme parks division.

Since Bob Iger took over in 2005, The Disney Company seems to have been hesitant to take big risks with the parks and resorts.  Iger seems more focused on the company as a whole. What’s more, the things that are being completed seem to take a long time. However, a recent interview with Iger may suggest that this is changing.

There are few reasons to consider when asking why Disney has been holding back, especially in building new resorts.

First, as I already mentioned, Iger is more focused on improving the company as a whole as opposed to focusing in the parks and resorts. This may not be all bad though. This year, revenue is up 6% and net earnings are up 12% to $55.6 billion and $9.4 billion respectively company wide.  The Disney Company is doing quite well, thank you very much.

Second, Disney has seen an increase in third-party hotel chains willing to pay them to build on Disney property. This is a way for Disney to increase occupancy rates without taking a risk themselves. Disney also doesn’t have to offer all of the amenities they do for their own hotels including free transportation from the airport and back with Magical Express and around the resort with Disney transportation. These hotels are also not included in Extra Magic Hours, so Disney can control the number of people vying for some coveted extra time in the parks with lower crowds. However, no matter how much Disney theming and how many Disney Characters are put into these third-party hotels, they’re just not the same as real Disney resort hotels. Disney fans can definitely tell the difference.

Finally, Disney may not want to increase their resort occupancy until they increase their park occupancy. This has come a bit in the recently expanded New Fantasyland in Magic Kingdom.  It is also coming in bigger ways in the expansions at Disney’s Hollywood Studios and Disney’s Animal Kingdom, which are currently in progress. There is also room to expand in Epcot especially in World Showcase. Though rumors have been around for years, there are no set plans to expand this area as of yet.

While Iger didn’t release any official plans, he did mention that hotels might be a good way to increase overall revenues in the theme parks. With expansions coming to the parks, Disney might be prepared to welcome even more guests.

Iger cited a 1% increase in the parks and resorts division to $4.4 billion. While quarterly operating income and revenues are down by 5% and 3% respectively, the per share rate is up 16% and per person spending is up 7% – probably due to higher ticket prices and costs of food and beverages. This is even in a modest 3% decline in attendance when compared to the same quarter last year.

Iger implied that raising ticket prices isn’t the only way to increase revenue. Disney has introduced new packages to funnel attendance away from peak periods, which leads to steadier crowds and better guest satisfaction year round.

With these numbers in mind, Disney has reason to believe that it might be time to build out some new hotels in both Walt Disney World and Disneyland. Walt Disney World has plenty of space and both parks have seen very high occupancy rates. Since most of their hotels are at capacity much of the year, it’s a pretty good bet that the old adage of “build it and they will come” will hold true in this case.

While we still have no idea what this could mean for the future of Disney Resort Hotels, we can look forward to the potential in the next several years.

Are you looking forward to new resort hotels at Disney World?