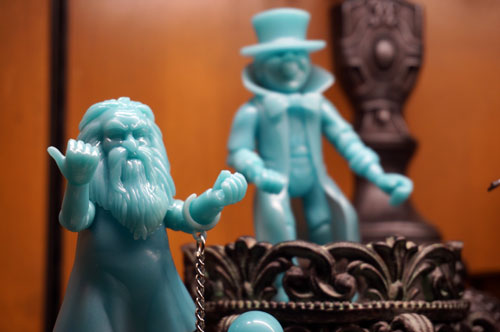 Many folks have been waiting for a gift shop dedicated to the Haunted Mansion.

Their wait is over.

After a few days of soft openings, Disney has opened Memento Mori in the former Yankee Trader location. Liberty Square will never be the same.

The name for the store is an interesting and clever choice. Let’s dive a bit deeper into that before we look at the shop itself.

What’s In A Name?

According to a detailed analysis by the University of Missouri, in pagan, times the Latin saying “carpe diem” was popular. It is roughly translated as “seize the day”. It was a time to “eat, drink, and be merry, for tomorrow we shall die.”

With the rise of Christianity, a new saying became popular: “memento mori” which loosely translates as “remember that you are mortal” or “remember that you will die.” The saying emphasized salvation of the soul, and was meant to remind readers that they were mortal.

In the Middle Ages, certain icons became associated with “memento morie” such as the skull, the hourglass, and the Grim Reaper.

The storyline in the narration of the Haunted Mansion talks about how you, as a mortal, might consider joining the 999 ghosts in the Mansion. There is always room for one more.

In addition, while the term “memento” in Latin means “remember”, today we often use “memento” as a “souvenir,” which is a great word to use in a gift shop.

All that makes for a very cool name for a store, don’t you think?

Let’s take a look around the store.

The store offers a large variety of merchandise in a vast price range from just a few dollars to a few hundred dollars. If you are a Haunted Mansion fan, you will love this store which offers t-shirts, mobile phone cases, art, figurines, and housewares.

Be sure to check back tomorrow for your chance to win a prize pack of fun merchandise from Memento Mori.

Do you like the new Haunted Mansion gift shop?