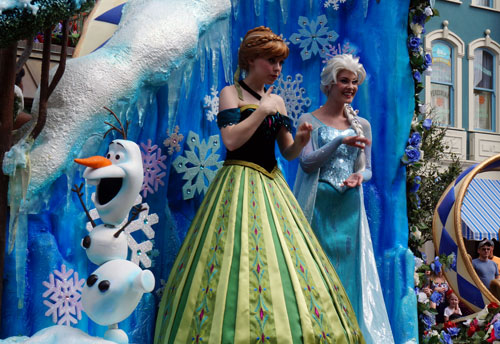 It is easy to see that “Frozen” mania is still on a roll. How do we know that? Here are three points:

First, the wait times for the Anna and Elsa meet and greet at Princess Fairytale Hall in the Magic Kingdom still reach two and three hours during times when the park is relatively slow.

Second, Disney is moving ahead with plans to build a “Frozen” based ride in Epcot‘s Norway where Maelstrom once stood. Disney hasn’t announced a firm opening date for the attraction, but it is generally expected sometime in 2016.

Third, Disney is now planning to add a new, mega Meet and Greet next to Norway in Epcot.

How the Word Got Out

Disney usually likes to keep attraction plans as secret as possible, but like all businesses, they need to file paperwork with local government agencies for building permits and approvals. Disney recently filed paperwork with the South Florida Water Management District for a construction project they called the “Epcot Frozen Meet And Greet.” That pretty much gives away what is going to happen.

The application describes a new 13,000 square foot building that will site between the Norway pavilion and, soon-to-be home to a “Frozen” attraction, and the existing Mexico attraction building.

It is interesting to note that there are many expansion pads between the existing country pads in World Showcase. The number of available expansion pads ranges from six to ten: Six spots if you count only primarily vacant land (except for storage spaces and small or portable buildings), and ten spots if you include the Millennium Village near the UK pavilion as well as space that is available on either side of the American Adventure.

The new building that Disney has proposed will likely be used for meet and greet sessions with Anna and Elsa, and perhaps even other characters like Olaf and Kristoff.

Sisters on the Move – Full Circle

When Disney first put a “Frozen” meet and greet in place, they put it into an existing building in the Norway pavilion. That effort in 2013 created huge lines and a space that was far too small for the immense demand created by the popularity of the film. People often waited three to five hours.

As a result, in April of 2014, Disney moved the sisters to Princess Fairytale Hall in the Magic Kingdom. Still, wait times can reach five hours, but there was more space for the huge lines.

Now, in a full circle move, it looks like Anna and Elsa will once again find themselves in Norway.

Are you looking forward to the brand new Anna and Elsa meet-and-greet building in Epcot?