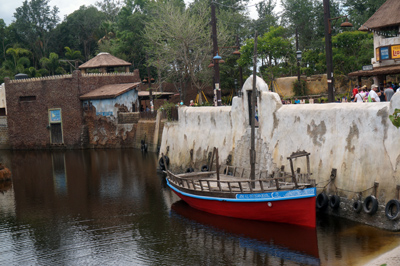 Since The Festival of the Lion King, one of the most popular shows in all of Walt Disney World, closed back on January 5, 2014, many folks have been anxiously awaiting the reopening of the show.

The show closed when Disney shut down the entire Camp Minnie-Mickey land of Disney’s Animal Kingdom as part of the preparations for construction of the new Avatar land.

According to a Disney Cast Member I spoke with, the new show is 99% the same as the old one. I haven’t seen the show in its new home in the Harambe Theater in the Africa section of the park, but when I do, I will tell you all about it.

However, I did get a chance to see the area that Disney opened around the theater. In addition to the theater, it also includes a new small gift kiosk and a new set of bathrooms.

The details are amazing.

Disney did a great job of blending the buildings into the look of the Africa section of the park.

Disney has also started to distribute a new Guide Map for Animal Kingdom. The map shows how this new section of the parks hugs the Discovery River and heads south. When comparing the old map to the new one, it is easy to see how Disney might connect up the south end of this Africa extension with the north end of the new Avatar land. I don’t know if that is the plan, but it looks like it could turn out that way.

Do you like the new location for Festival of the Lion King?