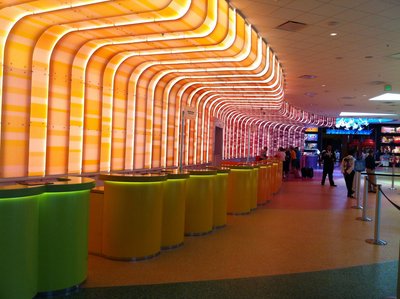 Each Disney Resort hotel has a unique personality, created primarily through the theme of each location.  Disney’s Contemporary Resort transports you to the future – or at least the as seen in the 1960s and 1970s, while Disney’s Wilderness Lodge takes you to the Pacific Northwest.  But while the personality of the resorts are very unique, many of the most fundamental design elements – such as the check in counter and the layout of the food court – are similar.  That will change a bit at Disney’s Art Of Animation Resort.

The Orlando Sentinel reports that, unlike all other Disney hotels, the front desk will not be a single long desk – with Disney Cast Members on one side and guests checking in on the other.  Instead, there will be smaller, individual desks – each something of an island on its own.  This will allow the Cast Member to walk out from behind the desk and stand next to the guest, creating a more personal and individualized experience.  This concept of the new, smaller check in desk with a more personal interaction seems to be quite a trend these days – I have experienced it in several newer hotels myself.

Another change is in the food court.  The food courts at other Disney Value Resorts, like Disney’s Pop Century or Disney’s All Start Music, are huge places.  While they have unique themes, their wide open design can also be a bit overwhelming.  At Disney’s Art Of Animation Resort, the dining area will be separated into four different seating areas, making for less of a “mega-cafeteria” feel.  There will also be some unique food choices, such as a Mongolian grill station and a place where you can get a smoothie.

All of these changes are specifically designed to make the admittedly-huge resort feel a bit more personal.  We can’t wait to see it.