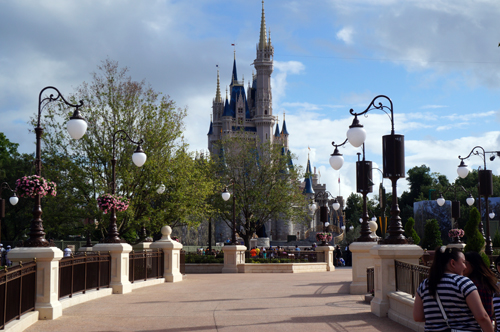 The Downstream Impacts of New Fantasyland: Food, Fireworks, and Flushes

When Disney opened the New Fantasyland in the Magic Kingdom, there was a lot of excitement around everything that came with the expansion, a project rumored to cost more than $400 million. As fans, we got the one-of-a-kind Seven Dwarfs Mine Train ride, the spectacular and still wildly popular Be Our Guest restaurant, the innovative Enchanted Tales with Belle, and Under the Sea – Journey of the Little Mermaid.

These new rides, shows, attractions, and restaurants excite fans and bring in more people, and therefore additional income, for Disney.

These expansions also have some downstream impacts. Since the Magic Kingdom can now host an estimated 5,000 additional guests, Disney needed to build out some additional parts of the park. All those extra people need a place to eat, a place to watch the nighttime fireworks, and – yes – a place to go to the bathroom.

Let’s take a look at some of the projects Disney implemented to serve all the new guests that New Fantasyland allowed into the park:

All the additional guests need a place to park. During busy days, the parking lot at the Magic Kingdom occasionally gets full. Disney then has to send guests to park at Epcot, where they can take the monorail to the Ticket and Transportation Center, and then on to the Magic Kingdom. That is an inconvenience for the guests, and a cost for Disney since they usually give people free parking for the inconvenience.

Disney announced they are shutting down the Richard Petty Driving Experience which sits in the Magic Kingdom parking lot. They will likely use that space to build out more parking spaces.

Now that all these extra people have parked their cars, they need to get to the Magic Kingdom. They can take the monorail or the ferry boats. Disney recently build a second dock for these huge boats at both the Ticket and Transportation Center as well as at the Magic Kingdom. This allows the boats to load and unload more quickly, since they don’t to wait for a single dock to free up.

Many fans were disappointed when Disney announced that we would not get a new ride based on the blockbuster animated film “Tangled” but instead would get restrooms. Still, with so many additional people flooding into the Magic Kingdom, they all need a place to go (pun intended). The restrooms are a necessary service that we would really miss if it wasn’t there. This addition also had two nice side benefits. First, it created a new area for stroller parking, which was often a mess given all the strollers around It’s a Small World and Peter Pan’s Flight. Second, it freed up the space that was occupied by restrooms near Peter Pan’s Flight, and Disney reworked that space into an amazing new queue that brilliantly introduces the ride.

The Adventureland Veranda was an opening day restaurant in Adventureland located directly across from the Swiss Family Robinson Treehouse. However, it sat largely underused for decades, except for some character meet and greets. Now, Disney is preparing to open a new and badly needed additional restaurant which is rumored to have a Jungle Cruise theme. They are also taking the opportunity to rework the kitchen, which is also shared by the Liberty Tree Tavern and The Diamond Horseshoe. This should result in better, faster food preparation.

At the end of the day, all the new folks that have packed into the Magic Kingdom will want to watch the Wishes fireworks spectacular unfold high above Cinderella Castle. If you’ve watched Wishes before, you know the huge crowds that the show attracts and how packed it can become. With the new expansion of the Cinderella Castle Hub, there is more room for people to enjoy the show.

At the end of the day, the crowds need to exit the park. Disney has opened up a new alley between Main Street USA and Tomorrowland. This area was previously restricted to Cast Members as a back stage spot, but now Disney has themed it a bit. This alley allows more guests to stream out of the park more quickly from the Cinderella Castle Hub.

Isn’t it interesting to think about all the downstream considerations that Disney had to plan for based on the new people that New Fantasyland can support?

Do think Disney does a good job of planning for crowd control?