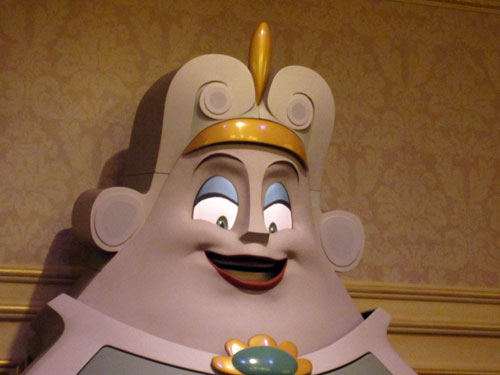 New Fantasyland: Where Disney Broke the Bank and Cut Some Corners

While it took quite a few years from announcement to completion, the new Fantasyland section of the Magic Kingdom is now complete. From the early opening of Storybook Circus section to the final crowning achievement of the Seven Dwarfs Mine Train ride, the new Fantasyland is, in my opinion, a hit. I believe it showcases what Disney does so well:  creating immersive  environments and telling stories like no one else can.

Before I go any further, I want to state again that I think new Fantasyland is terrific.

However, if you have ever worked on a remodeling project, you know that there are places where you inevitably need to cut the budget. It’s just a fact of life that we all have more ideas and plans than we have the money to carry them out. This is true whether it’s you or me remodeling the bathroom or Disney creating the biggest ever expansion of the Magic Kingdom.

I thought it would be interesting to look at where Disney broke the bank in investing in New Fantasyland, and where it appears they had to cut some corners.

Overall I think Disney did a great job in delivering a place where we can walk into worlds that came straight out of classic Disney movies. Many of these areas are truly breathtaking. Let’s look at a few that Disney did especially well. They probably had to break the bank to deliver these.

It’s not often that people talk about how amazing a queue is;  after all, it’s the place where you wait before the main attraction. However, when it comes to the queue for Under the Sea – Journey of the Little Mermaid, Disney created a queue the truly raises the bar.

Lush landscaping, waterfalls, and nautical elements everywhere make the queue for this attraction a true standout. You really feel as if you are entering the world of the Little Mermaid before you ever step on the ride. In my opinion, Disney created a new gold standard for queues when they created this one.

Be Our Guest Restaurant

There are many reasons why Be Our Guest has become one of the most popular restaurants at the Magic Kingdom. Part of that, I’m sure, is due to the unique design that allows the restaurant to be quick service location for lunch and a full sit down experience for dinner. Also, the food here is heads above what you get in most of the Magic Kingdom locations. In addition, Disney decided to offer alcohol at this location for the first time in Magic Kingdom.

All of these are reasons why Be Our Guest is popular, but I believe it is also popular because of the amazing design that Disney Imagineers created. It truly feels as if you have walked into the world of Beauty and the Beast once you are inside Be Our Guest.

From the suits of armor in the ordering areas to the various dining rooms which re-create scenes from the classic Disney movie, the design, craftsmanship, and detail are simply stunning. It’s like no other place in the world.

Spending a bundle on restrooms is something that most theme parks wouldn’t do. After all, while people want restrooms to be clean, they aren’t really attractions unto themselves.

While I don’t think people will visit the Magic Kingdom just to see the Tangled restrooms, seeing them is truly a sight to behold. Yes, the insides are nice but typical, but the outside is extraordinary.

The detail of Rapunzel’s tower, the small waterfall and river, and the hanging lanterns all come together to create an area which is peaceful and beautiful.

I could definitely debate the merits of spending so much money on a simple restroom, but I can’t debate the fact that the outcome is stunning.

While some of the animatronics in New Fantasyland are pretty typical (I’m thinking about most of the characters in Journey Under the Sea), Disney did break new ground and deliver cutting-edge animatronics in several attractions.

Besides these characters, Disney truly broke new ground in the animatronics inside the Seven Dwarfs Mine Train as well. While Disney created animatronics with projected faces for Buzz Lightyear, the dwarfs take the technology to a new level that is amazing.

It seems that all projects need to cut corners someplace, and this is true in New Fantasyland. Here are a few places where it feels like Disney ran out of money.

As I mentioned above, I believe that the Be Our Guest restaurant is incredible and the interior is worth seeing even if you don’t plan to eat there. However, as you approach the restaurant, it doesn’t really feel as if you are entering Beast’s castle. In fact, it looks like you were entering the mountain under the castle. The castle itself is tiny.

Wherever you look at new Fantasyland, you see amazing details. From the pawprints of animals in the Storybook Circus area to imprints of leaves in the cement around the Fantasyland forest, the detail under your feet is amazing. However when you look up, sometimes you don’t see that level of detail.

The prime example is in Beast’s library inside the Enchanted Tales with Belle attraction. If you look up, you’ll notice that the ceiling looks raw and unfinished. Yes, there is a chandelier in the center, but for some reason, the Imagineers decided not to finish off the space with a soaring detailed ceiling. Perhaps they needed this area to be open for the theatrical lighting, but in some ways, I think this space looks unfinished.

Another place where looking up can lead to disappointment is in Under the Sea – Journey of the Little Mermaid. Unlike the amazing ceiling in the ballroom section of the Be Our Guest restaurant or the incredible rock work that surrounds you on all sides in the Little Mermaid queue, the ceiling inside the attraction for the Journey of the Little Mermaid looks unfinished and industrial. I know this is not completely unusual; in It’s A Small World, you mostly see basic ceiling tiles. However, I think Disney Imagineers could have done some amazing things in the space above you if they had just a bit more time in a bit more money.

Overall new Fantasyland is a beautiful and well executed area. As it goes with all projects, however, it seems that a few corners were cut. Just imagine what Disney could have done with a few more years and an extra few billion dollars!

Do you like how new Fantasyland turned out?  Did Disney cut too many corners?