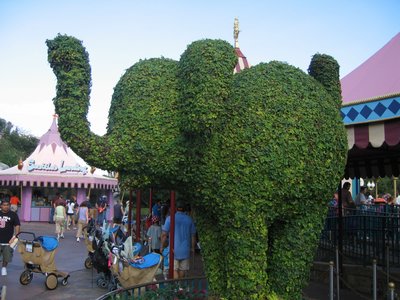 Walt Disney World fans everywhere have been anxiously awaiting the opening of the New Fantasyland at the Magic Kingdom in Florida.  Construction walls have been up for months, and the internet web sites and chat boards have been anxiously waiting to see finished results.  In mid March, 2012 some of the walls finally came down and Disney revealed portions of the Storybook Circus part of the New Fantasyland.

It is important to remember that the entire New Fantasyland project is huge – the biggest expansion of the Magic Kingdom theme park in its forty year history.  The project will open in phases, and the current opening is for just a few attractions – and even those which opened are necessarily 100% complete.  Here is a rundown:

This popular spinner attraction was relocated from its old home, not far from Cinderella Castle, to its new home in Storybook Circus.  The old Dumbo was a single ride, and ultimate plans are for two rides.  For now, a few Dumbo spinner has been installed, and it is much like the old one except that the colors and details are new and very well done.  In time, the old Dumbo will be relocated next to the new one, resulting in double the capacity.  There will also in time be a new ‘queueless queue’ – or a place to wait without having to move through switchback lines.  The details of this are still to be released, but it could be a preview of some of the changes we will see in the new xPass system which strives to reduce time spent waiting in traditional lines.

An exiting kiddie roller coaster has been rethemed with new circus-themed signs, and even a cannon which Goofy apparently used in this act.  The ride itself is the same but with all the new details and decorations it now looks completely different.

The train station includes a completely new building, with signage references to “Carolwood Park”, which was the name of Walt Disney’s personal Carolwood Pacific Railroad that he built in his back yard in the days before Disneyland.  There are plenty of details to enjoy, like the luggage of other passengers sitting around the station.

So far the initial internet buzz on the new Fantasyland expansion – or this little piece of it in Storybook Circus, has been very positive.  We can hardly wait to see more attractions, shops, and restaurants opening in the coming year.