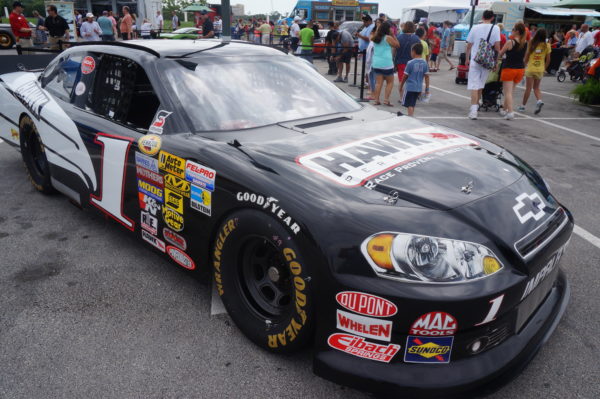 The Richard Petty Driving Experience opened in 1997 on the Walt Disney World Speedway, which was adjacent to the Magic Kingdom parking lot. It was a high energy opportunity for thrill seekers to satisfy their need for speed.

Originally, the program was only for adults to drive performance vehicles, but the track officials teamed up with Pixar to create real-life versions of some of the Cars characters. Aiken Axler and Sage VanDerSpin were 600hp high performance cars that were specially outfitted with safety seats for kids aged 6 to 13 years old and at least 48″ tall. The cars were wrapped so they looked like the characters on the outside, but it didn’t hinder the view from the inside.

After several accidents on the track, plus concerns about noise pollution intruding n the Magic Kingdom area deluxe resorts, Disney World decided to close the track and make room for a parking lot expansion.

Now, Andy Bardar, a Miami racing instructor and owner of High Performance Driving Experience in Homestead-Miami Speedway, is in talks to build the Orlando Motorsports Park in Osceola County on 217 vacant acres at the southwest corner of US 192 and SR 429, which is just a few miles from Walt Disney World.

Bardar has applied for a noise variance noting that even while the track is vacant, the noise will exceed county limits. There aren’t many details yet, but the application says that there will be three tracks: a fun track for the general public, one dedicated to carts, and another for members and professionals. The private club track will offer indoor vehicle storage, maintenance, a clubhouse, and lodging. All tracks will be designed by German firm Tilke Engineering, a leader in design and construction of road courses.

It’s unclear what experiences will be available to the general public, but the vehicles will be high performance, though there won’t be any modifications done beyond standard factory-installed equipment.

This planned speedway isn’t too far from other new construction, including the new Jimmy Buffet Margaritaville Resort. Developers say stores here could include automobile accessories, clothing, collectibles, restaurants, a museum, and driving instruction.

Clearly, this new driving experience will not replace the Richard Petty Driving Experience since it’s not on Disney property, but it does fill a void in the Orlando area.

Those affiliated with the Richard Petty Driving Experience have suggested that a new project might reopen somewhere in the area, but this does not involve Petty.

Would you go off Disney property to drive a high performance vehicle?