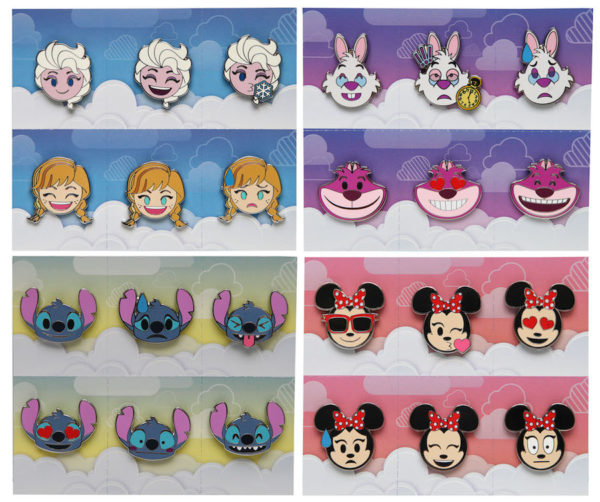 Pins have always been a popular souvenir in Disney Parks, but Disney started officially promoting and supporting pin trading in 1999 as part of the Millennium Celebration.

Over the years, Disney has created an estimated 60,000 unique pin designs.  Wow!

While each Disney Park has their own pin designs and encourages pin trading with Cast Members, pin trading is most popular in Walt Disney World.

Disney recently announced that they will be releasing some new Disney Trading Pins. The pins will come in a few different series, and some are limited edition. Some will only be available at Disney World while others can only be found at Disneyland.

Let’s take a look at the new pin series!

The Essence of Evil pin series pays homage to the Disney villains like Ursula from The Little Mermaid and Gaston from Beauty and the Beast. This limited edition pin will have a production of just 3,000 to be shared with Disney World and Disneyland.

The Doorways to Disney pins feature attractions with peak inside.

The production of 4,000 will also be shared between the two United States parks.

There will only be 1,500 Pieces of Disney History pins made, and they’ll only be available at Walt Disney World.

This year, Walt Disney World celebrates the 45th anniversary of the Jungle Cruise in Magic Kingdom‘s Adventureland. On May 11, 2017, a commemorate pin celebrating this attractions will be released in Disney World only.

Disneyland will celebrate the 50th anniversary of Pirates Of The Caribbean and release a similar commemorative pin. They will create 2,500 individual pins and 3,000 pins exclusively for Annual Passholders of Disneyland.

Disney has a popular app called Disney Emoji Blitz. The game unlocks a custom keyboard that allows players access to over 600 Disney and Pixar-themed emojis that you can text to friends. Now, they’re releasing a pin series to go with this game!

It’s an open edition series, so expect to find them all over the place in the parks including Pin Traders in Disney Springs, which has the best variety of pins anywhere in Disney World. They will also make an unlimited amount and will probably come out with more designs if they sell well.

If you like Disney Trading pins, consider signing up for the World of Walt Pin of the Month Club. There are three affordable subscription levels, so you can get Disney fun delivered every month!

Are you a fan of Disney Trading Pins?