However, we now have a new bit of detail about the land.

During a panel presentation at the Galactic Nights hard-ticket event on May 27, 2018, Disney announced the name of the village you will visit: Black Spire Outpost

Here is what the Disney Parks Blog has to say about this location:

“The largest settlement on the planet Batuu, Black Spire Outpost is an infamous stop for traders, adventurers, and smugglers traveling around the Outer Rim and Wild Space. Off the beaten path, this outpost has become a haven for the galaxy’s most colorful — and notorious — characters. Widely known for the petrified remains of its once towering ancient trees, the spires now stand guard across the river valleys and plains and have long captured the imagination of travelers to this planet. To the first settlers, these petrified spires became more than just landmarks; they became the heart of the outpost itself.”

Black Spire Outpost is the name of the village inside of the upcoming Star Wars: Galaxy’s Edge. Photo credits (C) Disney Enterprises, Inc. All Rights Reserved. 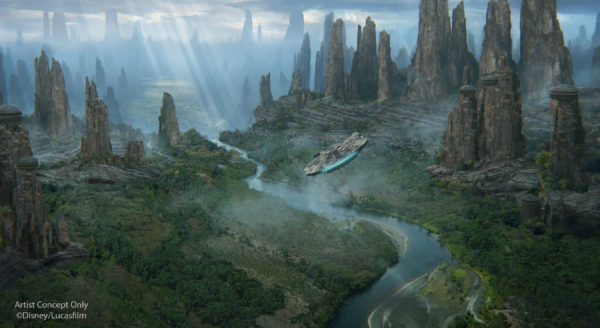 Black Spire is associated with the geological formations that surround it and is the largest settlement on the planet Batuu. Photo credits (C) Disney Enterprises, Inc. All Rights Reserved

You can watch a replay of the full panel presentation from Galactic Nights here: