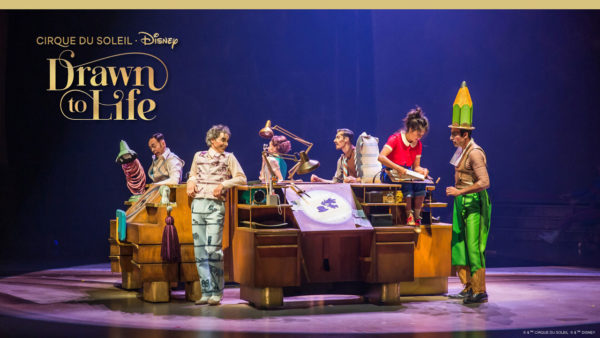 The Disney Springs West Side will see some new activity on November 18, 2021, when the new Cirque du Soleil show called Drawn to Life opens.  Tickets go on sale on August 20.

Walt Disney Animation Studios and Cirque du Soleil collaborated in the creation of the new show, which presents the story of a father and daughter.  It includes inspiration from Disney’s 100-year heritage of animation.

The show will be suitable for kids and adults and includes the music, acrobatics, and choreography, audiences have come to expect from Cirque.

Disney announced in late 2017 that La Nouba, the predecessor show, would close.

Disney had originally planned to begin performances of Drawn to life in the spring of 2020.  Disney even presented a media preview of the new show in March 2020.  However, the pandemic put the show on hold.  Sadly, the Cirque du Soleil company filed for bankruptcy, but it seems the organization is coming back.

Will you see the new Cirque du Soleil show, Drawn to Life?