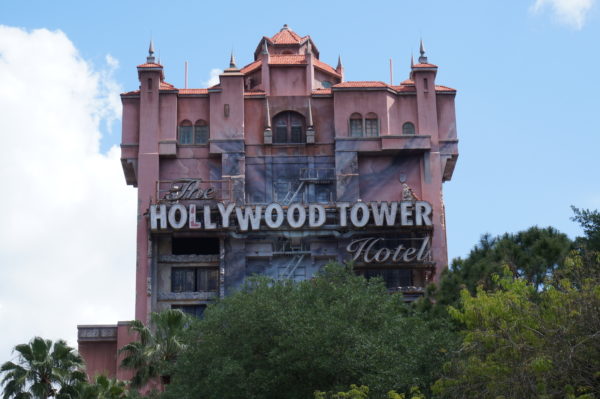 Two years ago, Disney’s Hollywood Studios said goodbye to the long running Osborne Lights, and fans everywhere were heartbroken. This was a necessary casualty for the build out of Star Wars: Galaxy’s Edge.

Osborne Lights, a family-based and family-friendly attraction, was “replaced” last year with Jingle Bell, Jingle BAM!, which was a good projection show, but not as impactful as the Osborne lights.  it feel flat compared to its predecessor.  Jingle Bell, Jingle BAM! will return this year along with two new shows, all of which will run from November 9th to December 31st.

Let’s take a look at these two new events!

Echo Lake is an under-appreciated area of Disney’s Hollywood Studios that is based on a real location on the west coast and mimics the “California Crazy” architecture for which the area has become known.

One of those pieces of architecture is dinosaur Gertie, who also houses an ice cream shop. Gertie will be getting in the Christmas spirit this year when she becomes Santa Gertie as part of the Echo Lake Christmas event.

In addition to Santa Gertie, there will be “extra-large ornaments”, colorful garland, and a giant Christmas tree right in the middle of the lake.

The event will also include new songs from the new animated short, Olaf’s Frozen Adventure as part of A Frozen Sing-along Celebration, plus Olaf himself will show up!

This will be more of a display than a show, but it will definitely be something to check out even though it’s not a replacement for Osborne Lights.

Sunset Season’s Greetings will definitely be a show. New electronic billboards on Sunset Boulevard will also be a part of the show.  However, the signature element of the show will be projection mapping technology which will turn the Hollywood Tower Hotel into a musical, magical Christmas show.

For this show, the Twilight Zone Tower of Terror loses is scariness and disappears almost completely when it’s transformed to bring beloved characters’ stories to life. Mickey and Minnie will reminisce about a hometown Christmas as the Tower of Terror becomes a Normal Rockwell-inspired town. It starts out black and white and slowly becomes colorized.

Toy Story characters also get in the fun as they wonder what toys will be moving in on Christmas morning. During this section, the Tower of Terror is covered in wrapping paper!

The Swedish Chef from the Muppets turns the entire hotel into giant gingerbread houses, and Olaf shares a Christmas wish as the scene freezes over into a Frozen winter wonderland. The real wow factor here is the promised Aurora Borealis lights that will be joined by falling snow!

Disney has installed new projectors to accommodate the pictures on the hotel building.

If this show is popular, which I really hope it is, there could be a lot of congestion on Sunset Blvd leading up to the show. It’s already a very crowded area with people trying to get to the Tower of Terror, Rock ‘n’ Rollercoaster, and Fantasmic!

My best is that this show won’t be quite as popular as the Osborne Lights, and it won’t draw as large of a crowd. Hopefully the show is still a great a success, and the crowds are bearable!

Are you excited for Christmas at Disney’s Hollywood Studios?